You are viewing documentation for version: 2.13 | 3.0 | Version History

With the throughput tester example application, you can measure the Bluetooth connection bitrate of the EFR32/BGM device running the Silicon Labs Bluetooth Low Energy stack. Both acknowledged and unacknowledged operations can be tested, using indications and notifications respectively. The example can also serve as a basis for testing Coded PHY and/or range.

Throughput tester measures the data throughput between a slave and a master device and reports the bps and GATT operation count values. The slave device functions as a GATT server and sends data to the client (master). The example application implements both roles in the same firmware, which enables using the same firmware for both the master and slave device and testing throughput between two radio boards, or against another third-party device such as a smart phone.

This example demonstrates the SoC version of the throughput tester. For the NCP version see this link.

These are the three operation modes for the throughput testing:

The default values are hard coded to the firmware and can only be changed at compile time in app_utils.h. In fixed modes, data transfer is triggered by pressing PB0. However, you don't have to keep holding down the button because the application watches for the time/data threshold after it starts transmitting.

The SoC application consists of 5 main files with the following purposes:

Both the master and slave implementations have similar state machine structures using switch-statements. The program state machine flow after connection is established is shown in the figure below. 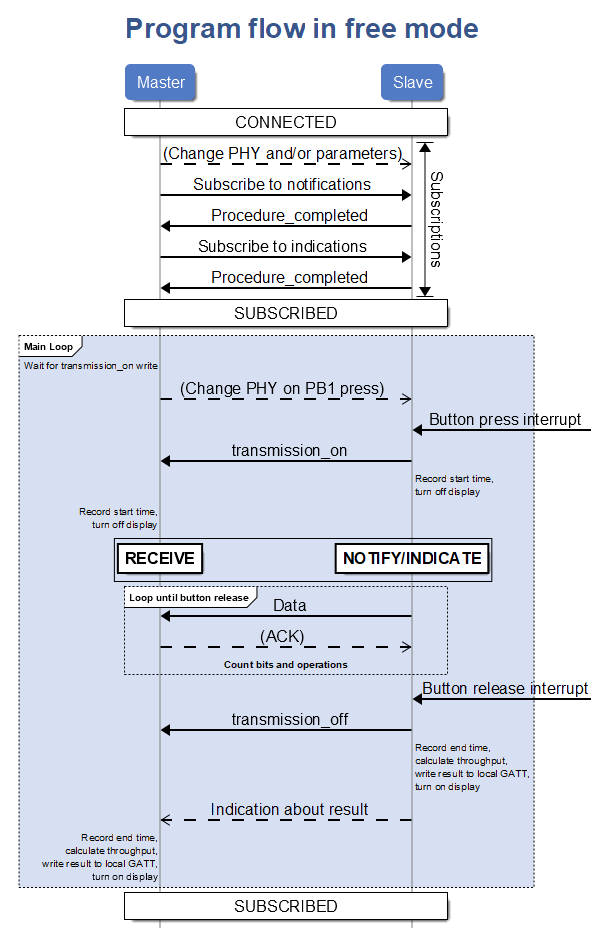 In SUBSCRIBED, data transmission can be initialized from the slave by pressing and holding the push buttons. This will make a write without response to the Transmission ON characteristic in the master side GATT database to signal that the transmission is starting. Both sides turn off their LCD display refresh with the gecko_cmd_hardware_set_soft_timer(0, SOFT_TIMER_DISPLAY_REFRESH_HANDLE, 0) call. This way refreshing won’t negatively affect throughput during transmission. The display refreshing is turned on again after the transmission. Start and end times for calculating throughput are taken by using RTCC_CounterGet() value. Master checks raised events for a write to Transmission ON and transitions to RECEIVE after doing the above preparations. The slave transitions to NOTIFY or INDICATE depending on whether the button pressed was PB0 or PB1.

During transmission, master, the receiving side, handles gecko_evt_gatt_characteristic_value events and keeps incrementing the bitsSent and operationCount variables when data is received. It also checks if the event’s att_opcode shows that an indication to Indications characteristic is received, in which case a confirmation is sent back to the slave to acknowledge the successful operation. For indications, the slave must wait for the confirmation from the master before registering the bits as sent. The program stays in the INDICATE state until the last of the confirmations is received and none are left pending (waitingForConfirmation flag variable is used for this).

The transmission ends after the push button is released on the slave side. Releasing the button triggers another write without response to Transmission ON characteristic, at which point the end time is taken and the display is refreshed again, as mentioned above. After calculating the throughput, each side writes the result to their own local GATT database. The slave also sends an indication about the result to the master. This is used when the master device is a PC or mobile device. Afterwards, both sides return to SUBSCRIBED_(NOTIFICATIONS/INDICATIONS) depending on whether both notifications and indications were subscribed to.

Both the master_main and slave_main include a call to handle_universal_events function at the end of each loop. This is a switch-case for checking events such as interrupt signals from buttons and timers, connection parameter updates and le_connection_closed event. They need handling regardless of the main state of the program. The event that is checked is the same that falls through the main state switch.

To run this example you need the following:

Now, the project should build without errors. When you flash the application, you should see a screen similar to this on your kit. 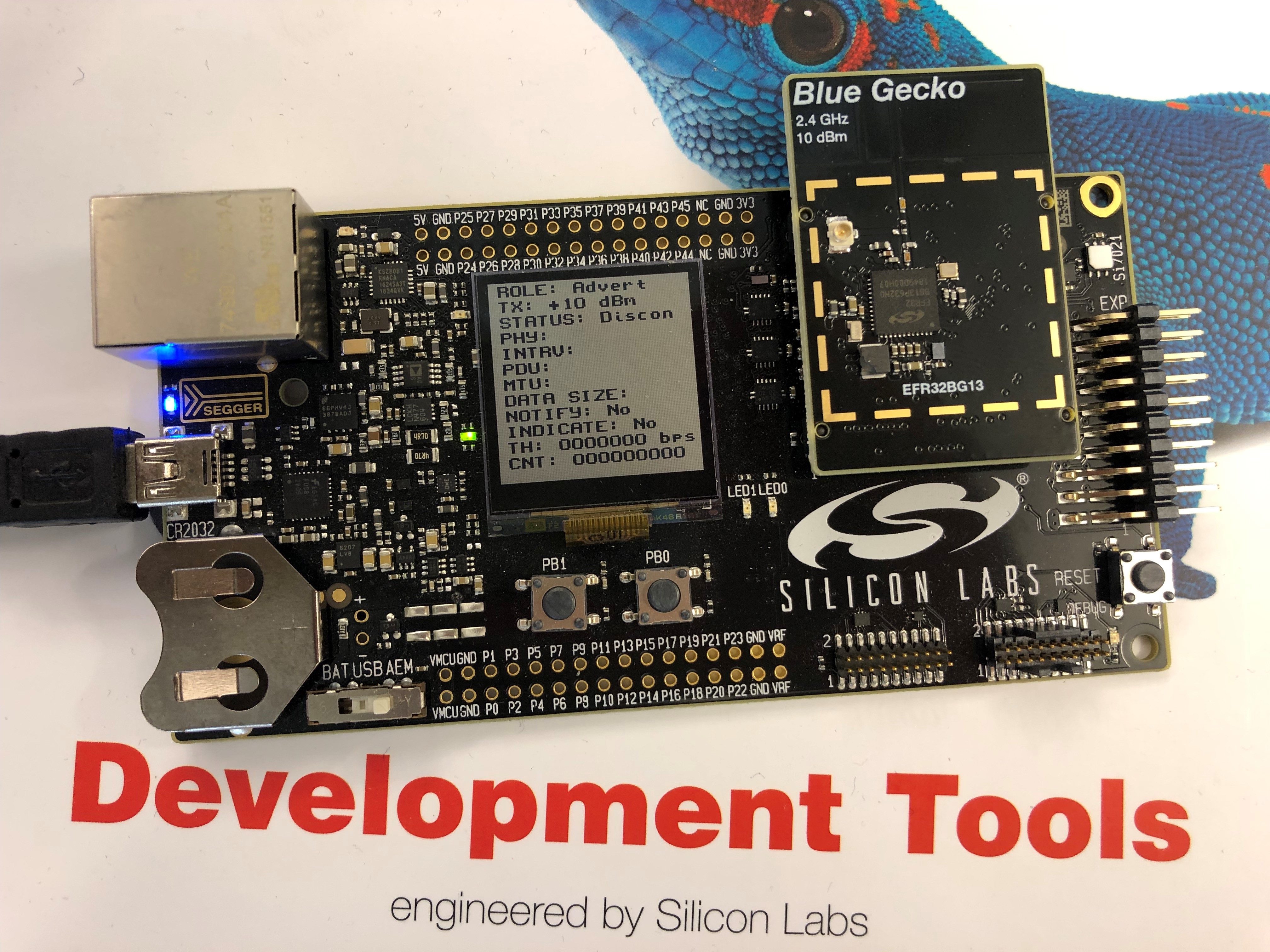 The same Throughput Tester firmware is used for both master and slave devices. The device boots into Slave role by default. Booting to Master role is triggered by holding down PB0 while the RESET-button is pressed. After releasing RESET, the application will start in Master role and connect to any device which has "Throughput Tester" as the device name. (If a more selective scanning approach is needed, modify the process_scan_response function in app_master.c)

The devices are controlled using the push buttons (PB0 and PB1) of the WSTK. Depending on the device role, the buttons have different functionalities. You can check the role from the display. When not connected, slave device will show "Advert" as in advertiser and master device will show "Scanner". When connected, the role field will change to slave/master, status field will change to show the RSSI and some connection parameters will appear on the display. 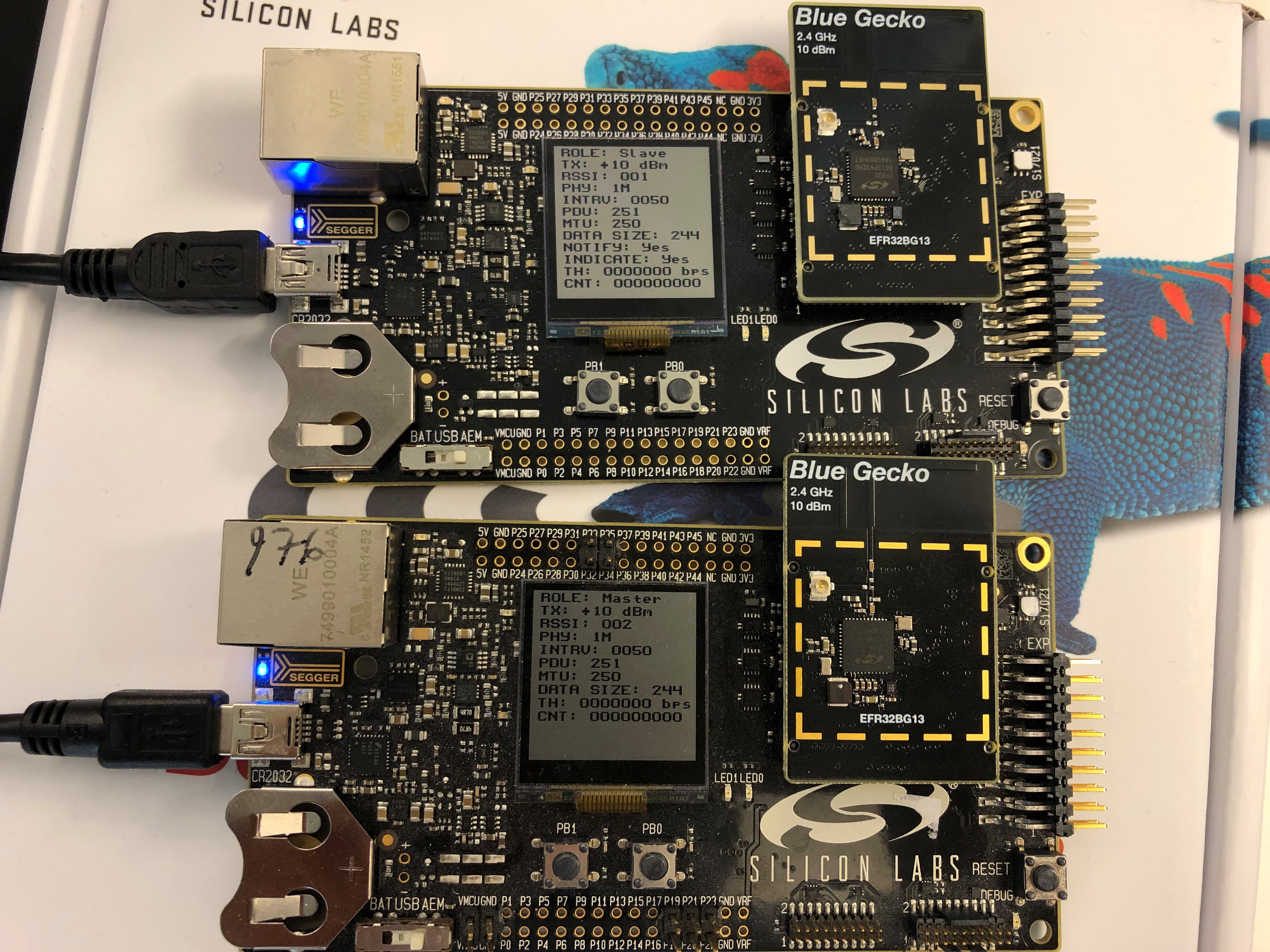 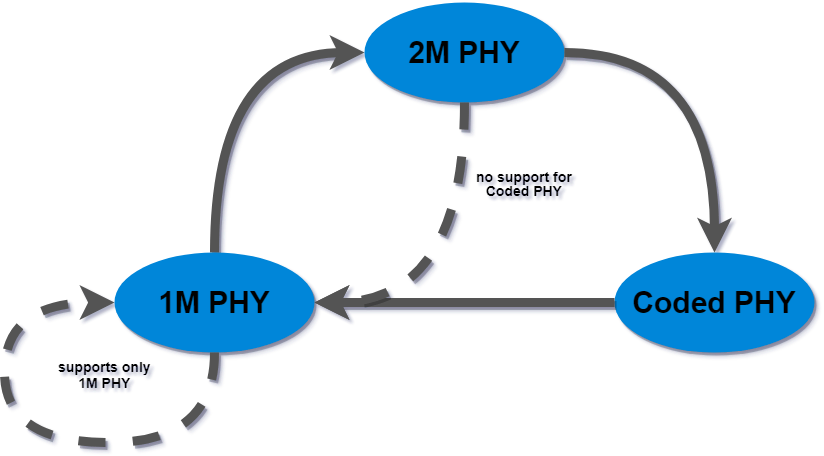 On certain devices the Coded PHY is not supported. In these use cases the PHY will only be changed between 1M and 2M. If no other PHY than 1M is supported, the change will not be triggered.

In slave role, the device starts an advertisement set with both 1M and Coded PHYs. It advertises the "Complete Local Name" AD data type with the name "Throughput Tester".

Depending on which button is pressed and held down, the slave will generate data and send either notifications or indications. After the connection is established, the buttons have the following functions:

Throughput between Radio Board and Smart Phone

A smart phone can be used as a GATT client. You will need an app like the Blue Gecko (Android / iOS) which can connect to Bluetooth devices and read and write characteristics. The steps to conduct a throughput test are the following:

Throughput between Radio Board and 3rd Party Device

As you might guess from the mobile app approach, you can use any BLE-capable 3rd party device, such as a USB dongle or laptop Bluetooth adapter to issue the GATT commands to write and read the above characteristics. One example with the NCP host application is discussed in later sections.