Note: 2M and LE Coded PHY is only supported on specific devices.

Changing to 2M or LE Coded PHY can be requested from either slave or master device using the command gecko_cmd_le_connection_set_preferred_phy(uint8 connection, uint8 preferred_phy, uint8 accepted_phy), where the preferred_phy value maps as follows:

For compatibility reasons, the default PHY is always 1Mbit on a connection. Also by default this PHY should be used for advertising, as well. After the connection is formed, either side (master or slave) can request a new PHY to be used. Once the PHY changes, it is reported in a le_connection_phy_status event.

Note: It is also possible to scan and advertise on LE Coded PHY and therefore the connections can also be established using coded PHY. See Advertising and Scanning with LE Coded PHY.

Note: When a new PHY is requested it will take a minimum of 6 connection intervals for the device to switch to the new PHY.

The event le_connection_phy_status will be raised on both devices in the following situations (if the new PHY request is accepted by the receiving device):

The event le_connection_phy_status will only be raised on the requesting device when:

An additional note is that the default coding for LE Coded PHY is S=8 (125kbit). This means that when an EFR32BG13 accepts a PHY change request to LE Coded PHY it will default to S=8. It is up for the application to change the coding if desired and the new coding will then be used if the PHY is again changed to 1Mbit/2Mbit and then back to LE Coded PHY.

Here are a few examples of changing between the PHYs using 2 EFR32xG13 devices in NCP mode and controlled with BGTool. 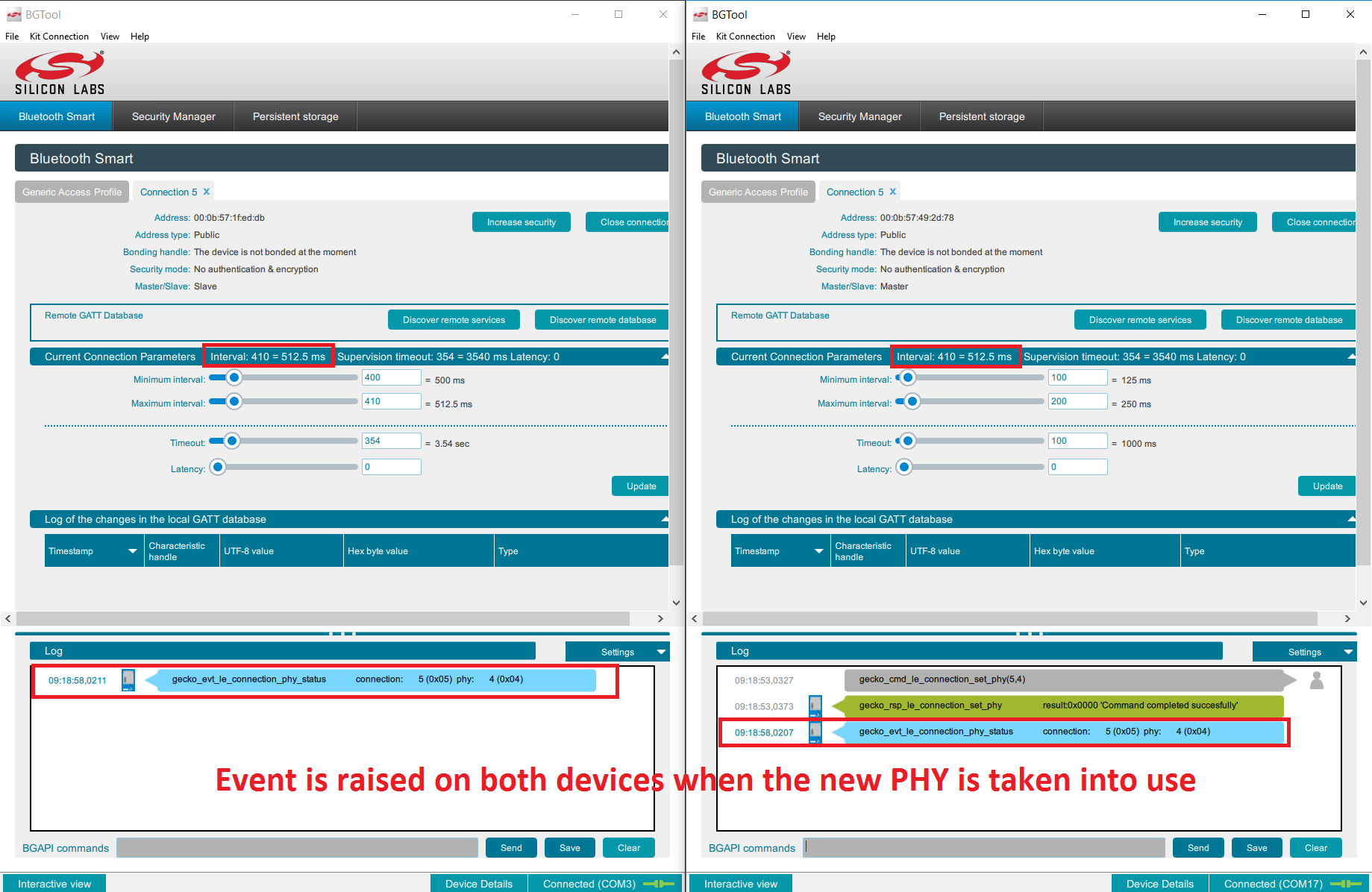 As explained earlier in this article changing the coding is not negotiated over-the-air between the devices and for that reason the event le_connection_phy_status is only raised on the requesting side and very shortly after the command is sent. The receiving device will continue using the same coding. 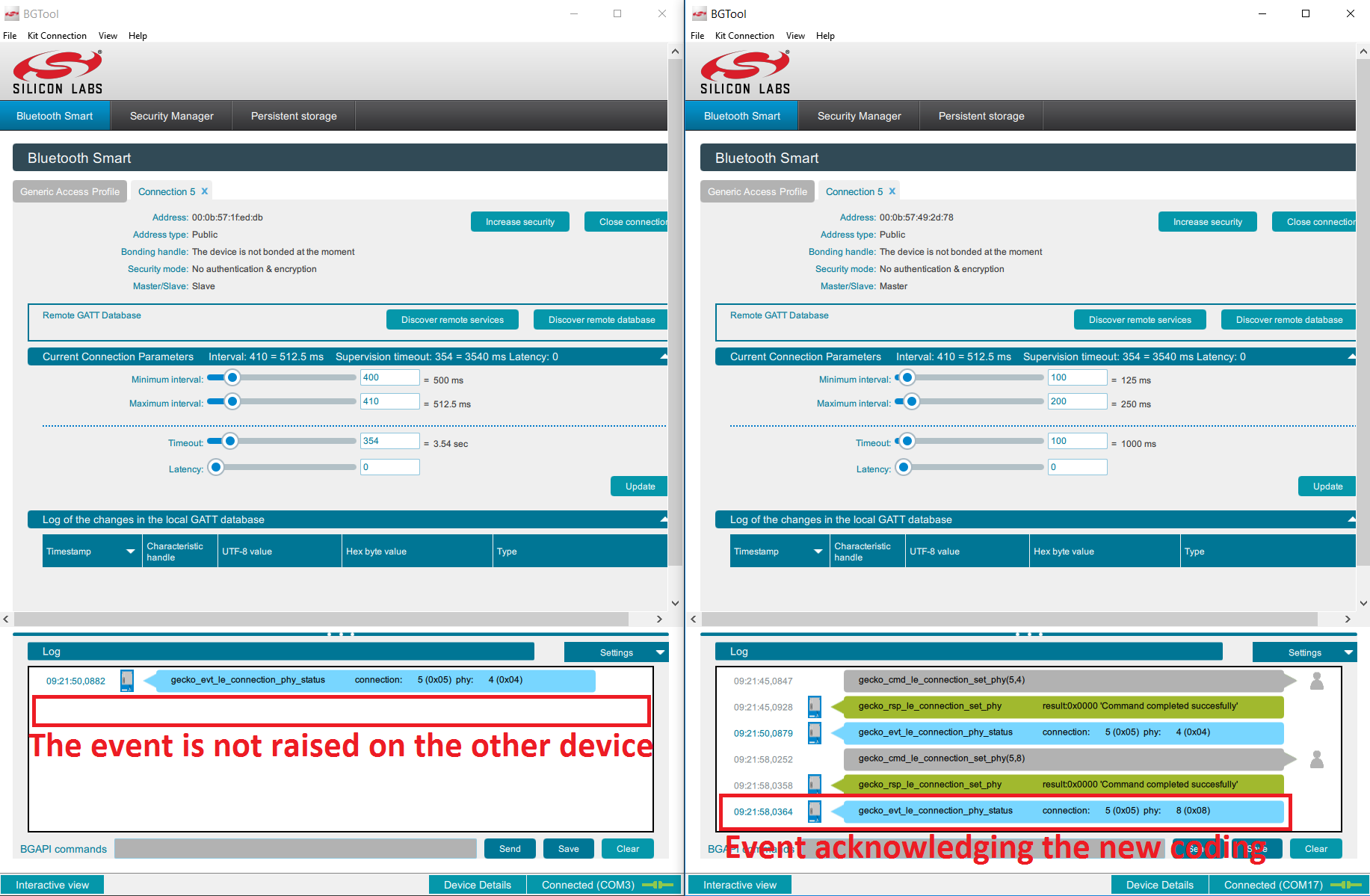 In the example below a new PHY request is attempted but the other device is an EFR32BG1 which only supports 1Mbit PHY so the event le_connection_phy_status is immediately raised on the requesting device to notify that the PHY has not been changed and no event is raised on the receiving device. 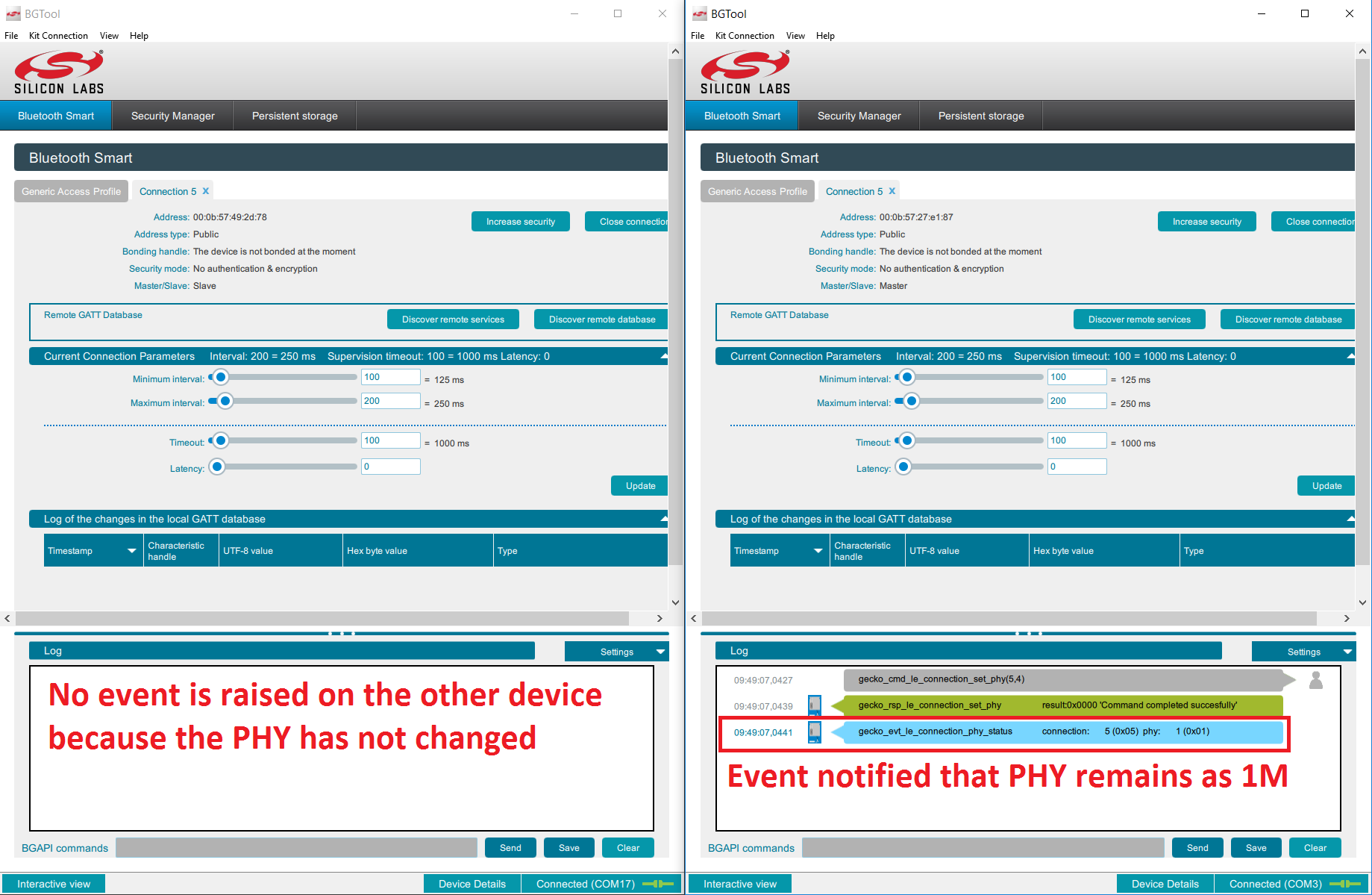 These measurements were made from the slave device (RX precedes TX) with TX Power of 0dBm and the images are sorted from shortest to longest RX/TX periods: 2Mbit, 1Mbit, LE Coded S=2 (500kpbs) and LE Coded S=8 (125kpbs).

Note: When using LE Coded PHY the packet header is always coded with S=8 but the payload can be S=2 or S=8 coded and that is indicated by a bit in the header. This means that empty packets will not have a significant difference between S=8 and S=2 coding in terms of TX duration. 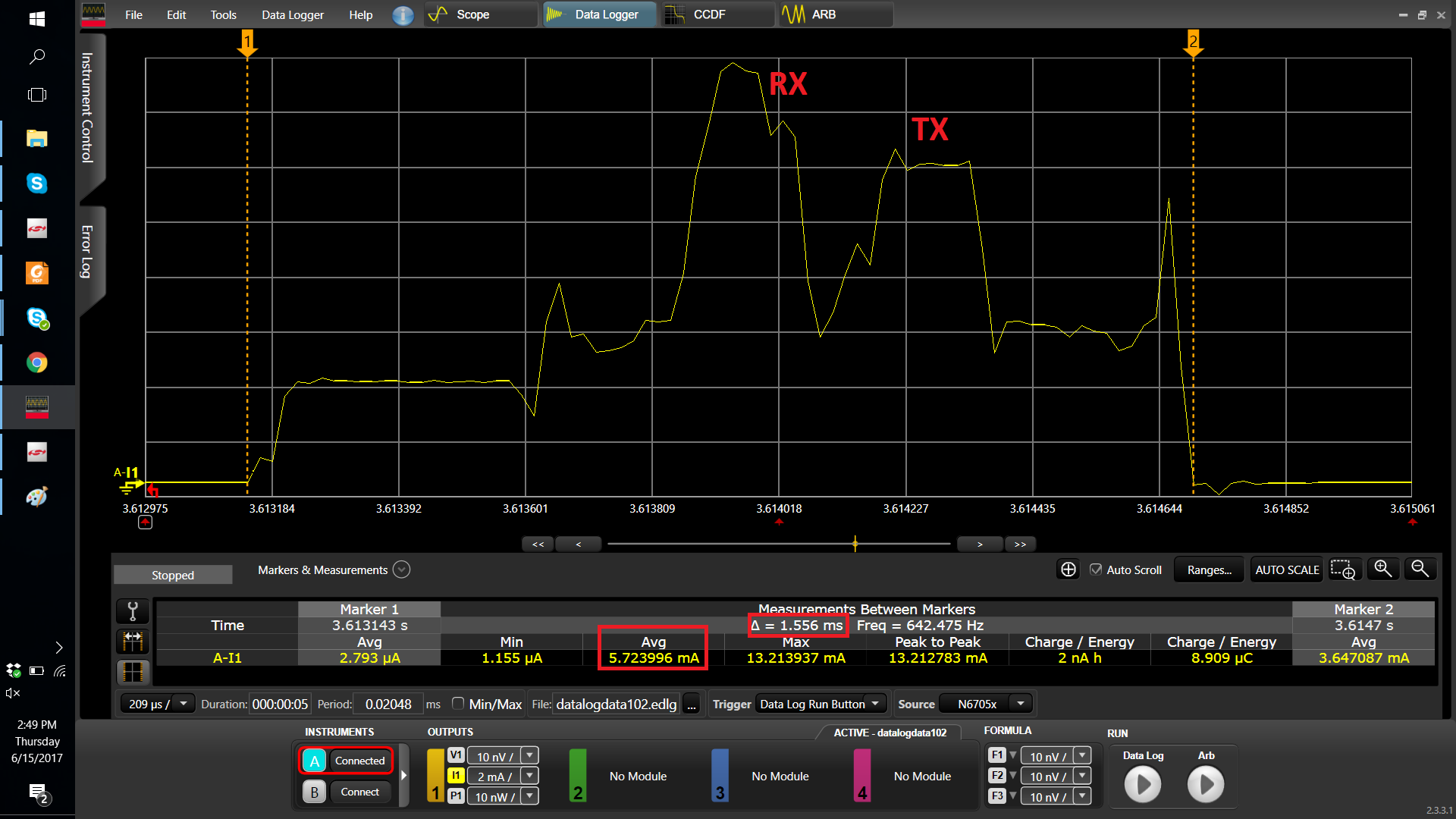 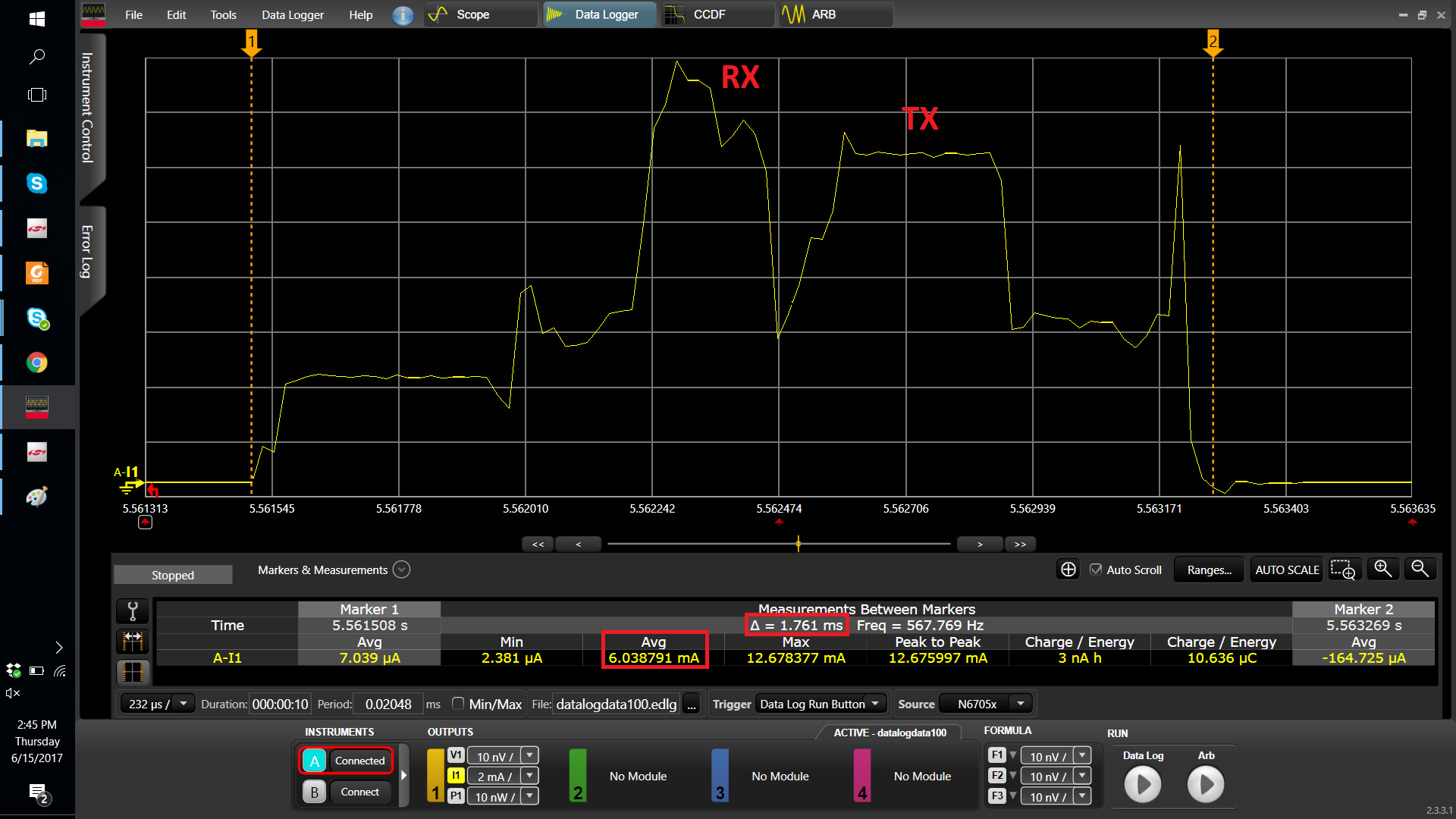 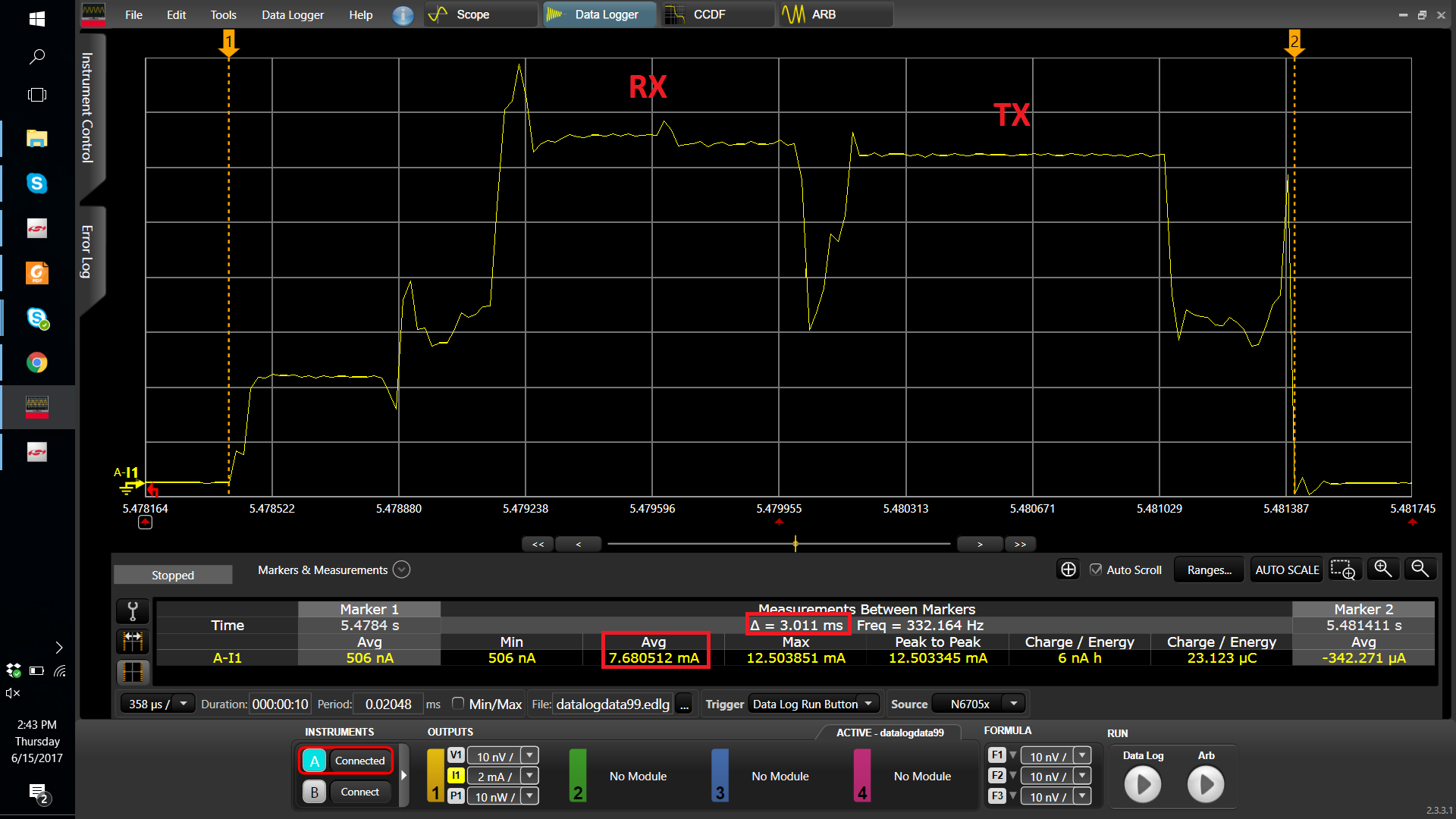 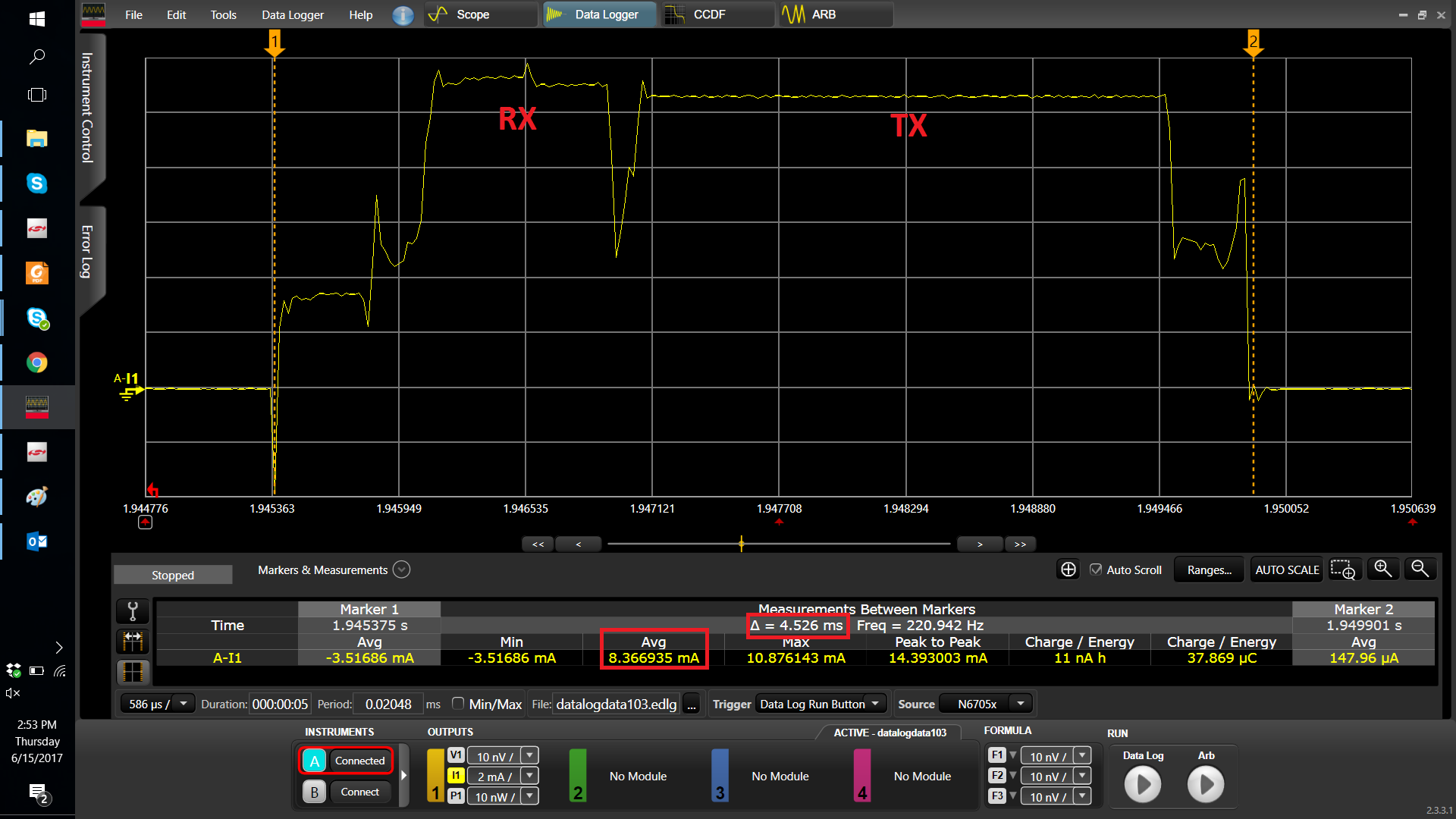