The SoC-iBeacon example running on EFR32BG13 radio board (BRD4104A) was used because it sets the device to broadcast in non-connectable mode, which means that only TX and sleep events are observed in the Energy Profiler.

According to the EFR32BG13 data sheet, the current consumption of the CPU in EM0 mode with all peripherals disabled and DCDC in low noise CCM mode (default setting of DCDC in the test application) is 97 uA/MHz. Therefore, the active CPU core driven by 38.4 MHz HFXO will consume a total amount around 97*38.4 = 3.72 mA.

Also, typically the applications use multiple peripherals, such as RTCC, LDMA, PRS, USART, MSC, CRYPTO, GPIO. EFR32BG13 data sheet does not provide detailed typical current consumption of each peripheral, however, the characteristics of EFM32LG can be used as a rough reference. Below are the electrical characteristics of digital peripherals from EFM32LG data sheet. Depending on their usage, they may contribute up to hundreds of microamps(uA) in total current consumption.

The power consumption of the radio depends on the TX power level and the amount of time that radio is active for transmitting, and the active radio time affected by the PHY selection and the payload size.

The TX power level setting is always a trade-off between the required transfer range and current consumption. The distance that the radio signal can travel increases as a result of increasing the TX power level, but, as a consequence, the current consumption also increases. Note that, to improve the range performance of a bidirectional communication, both devices in the communication should increase the TX power level. Otherwise, the range is limited to the smallest of the link budgets in either direction.

Taking the EFR32BG13 for example, the current consumption of the device (MCU in EM1) with 3 dBm TX output power is around 16.5 mA. The value rises to around 26.0 mA while setting the TX power to 8 dBm.

The Energy Profiler in Simplicity Studio is a software tool that works together with the Advanced Energy Monitoring (AEM) circuitry built into the WSTK main board. It allows measuring the current consumption of the test device in real-time.

If the test device is programmed with the SoC-iBeacon example, it will broadcast a beacon every 100 ms with 0 dBm TX power level by default and the device will enter sleep mode (EM2) between each two broadcasting events. 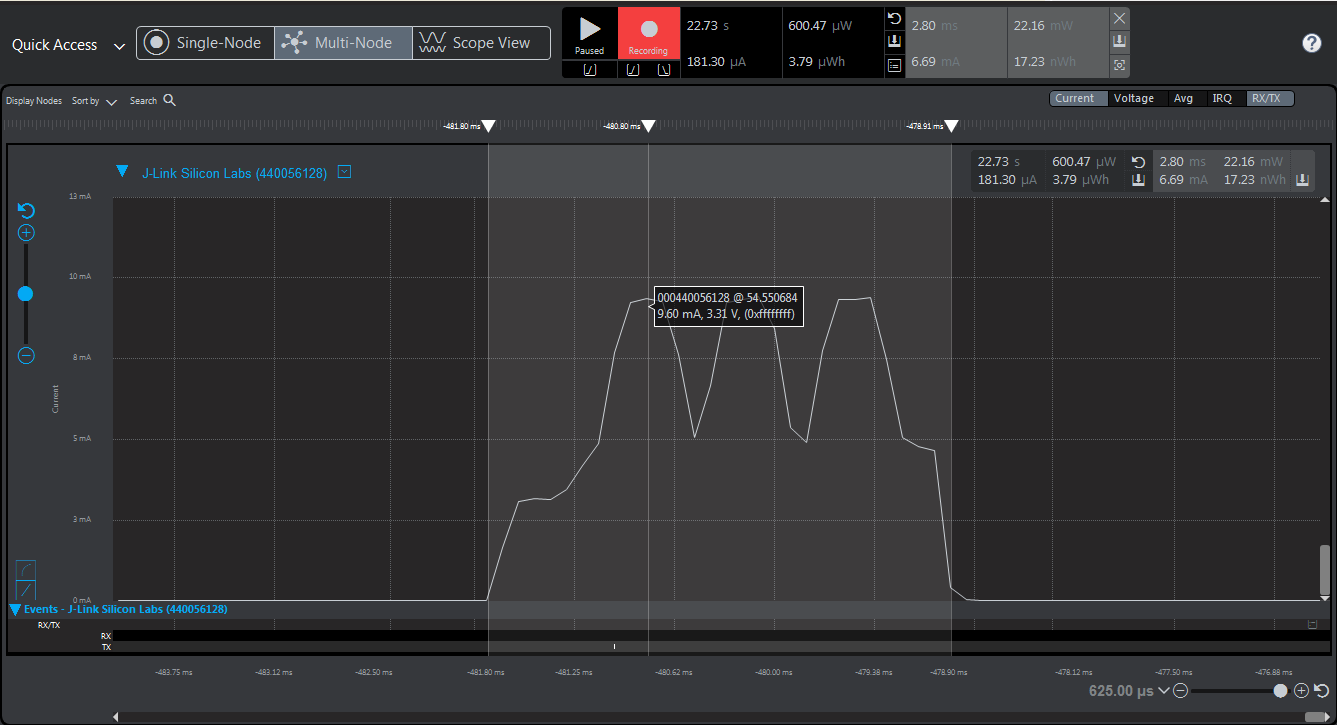 The table below shows a summary of the current consumption measurements for different TX power levels.

The two charts below illustrate the current consumption (Y-axis) from the table above, across the different TX power levels (X-axis). It is easy to identify that there is no notable difference when decreasing the TX power from 0 dBm down to -26 dBm. 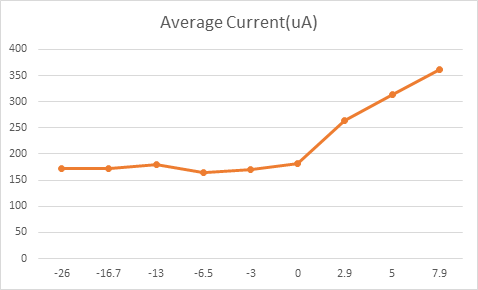 Based on the measured results, lowering the TX power is beneficial but not across the entire TX Power scale. At a given point, the TX current consumption will be much smaller in comparison with the other parts of the SoC (CPU, crystal) that any further reduction will not have a significant impact on the overall figure.

In the case of EFR32BG13 which was used in this practical test, it may enough to set the TX power level to around 0 dBm for saving power, but going below that will no longer affect the system current consumption significantly.