Maximizing energy efficiency in IoT battery applications is critical. Every micro-amp counts. Finding ways to reduce power can extend battery life considerably. Silicon Labs EFR devices offer multiple ways to help reduce power for a variety of applications. One of the biggest ways to improve energy efficiency is to limit the time the CPU spends executing code. With the CPU sleeping, the CPU tasks need to be offloaded to the hardware in the MCU. Instead of being in a paradigm where software running on the CPU does everything, software development should focus on setting up hardware to do the heavy lifting and only intervene when hardware needs assistance. In other words, hardware should be the main driver of the application doing the bulk of the work. The two main goals are to sleep as deeply as possible and wake up as seldom as possible.

The EFR32 devices feature a Peripheral Reflex System (PRS) with configurable logic allowing for combinational functions between channels. Multiple channels can be cascaded to produce more complex functions. This lab will demonstrate how to set up the PRS and implement complex logic functions such as a SR Latch using the Thunderboard (EFR32BG22). The training consists of two labs, each one highlighting a different complex logic function. Lab #1 will go through how to implement a XOR function using two inputs. Lab #2 will show how to implement a SR Latch. 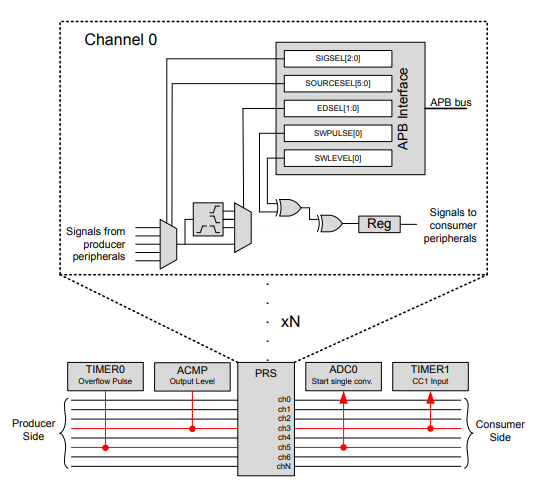 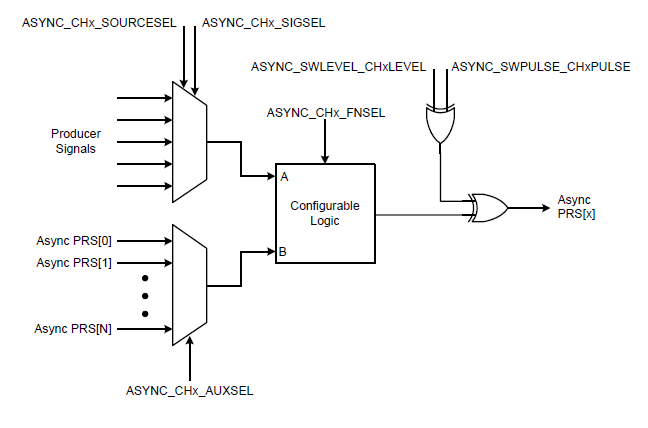 Within the PRS module, the configurable logic feature enables a PRS channel to perform logic operations on the signal coming from the selected producer. The configurable logic block for each channel has two inputs. The first input, Input-A, is the signal from the selected producer. The second signal, Input-B, is the output selected from another PRS channel. This allows for combinational functions where multiple channels can be cascaded to produce more complex functions.

Using the FNSEL field, a total of 16 two-input functions can be implemented.

Creating the Base Project 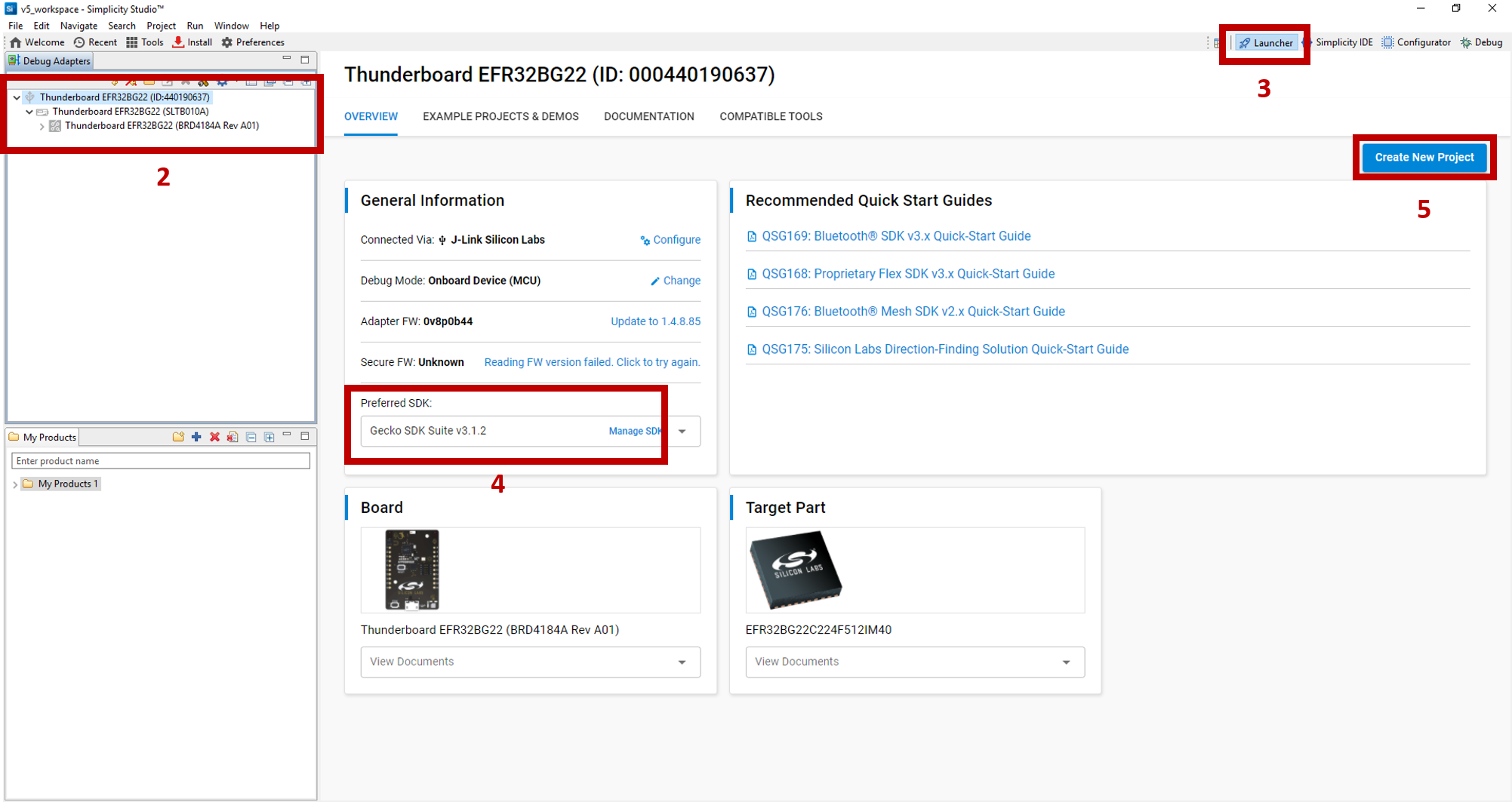 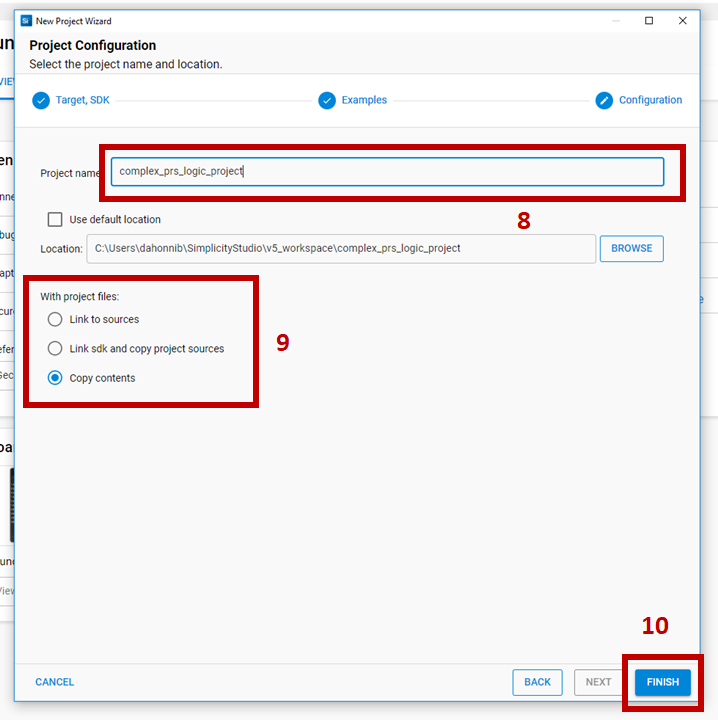 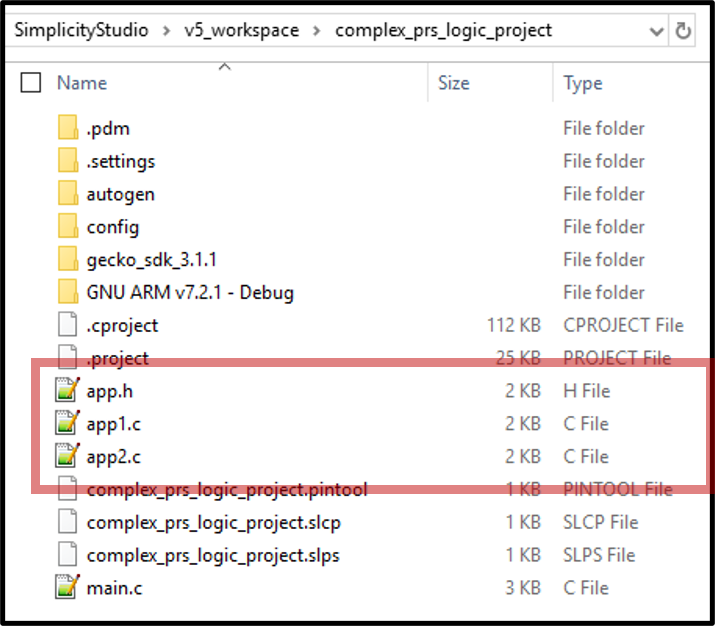 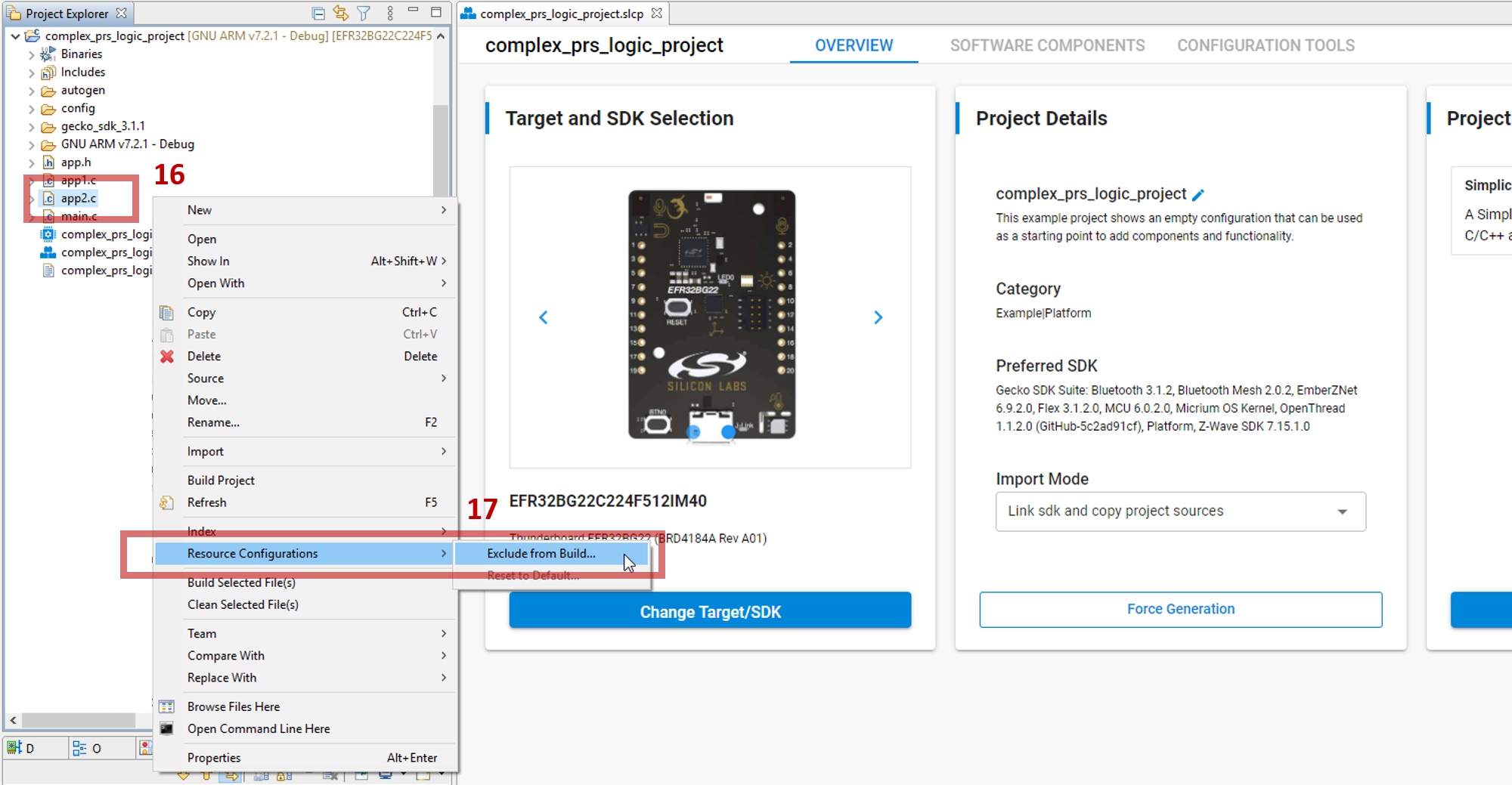 Build and Flash the Project 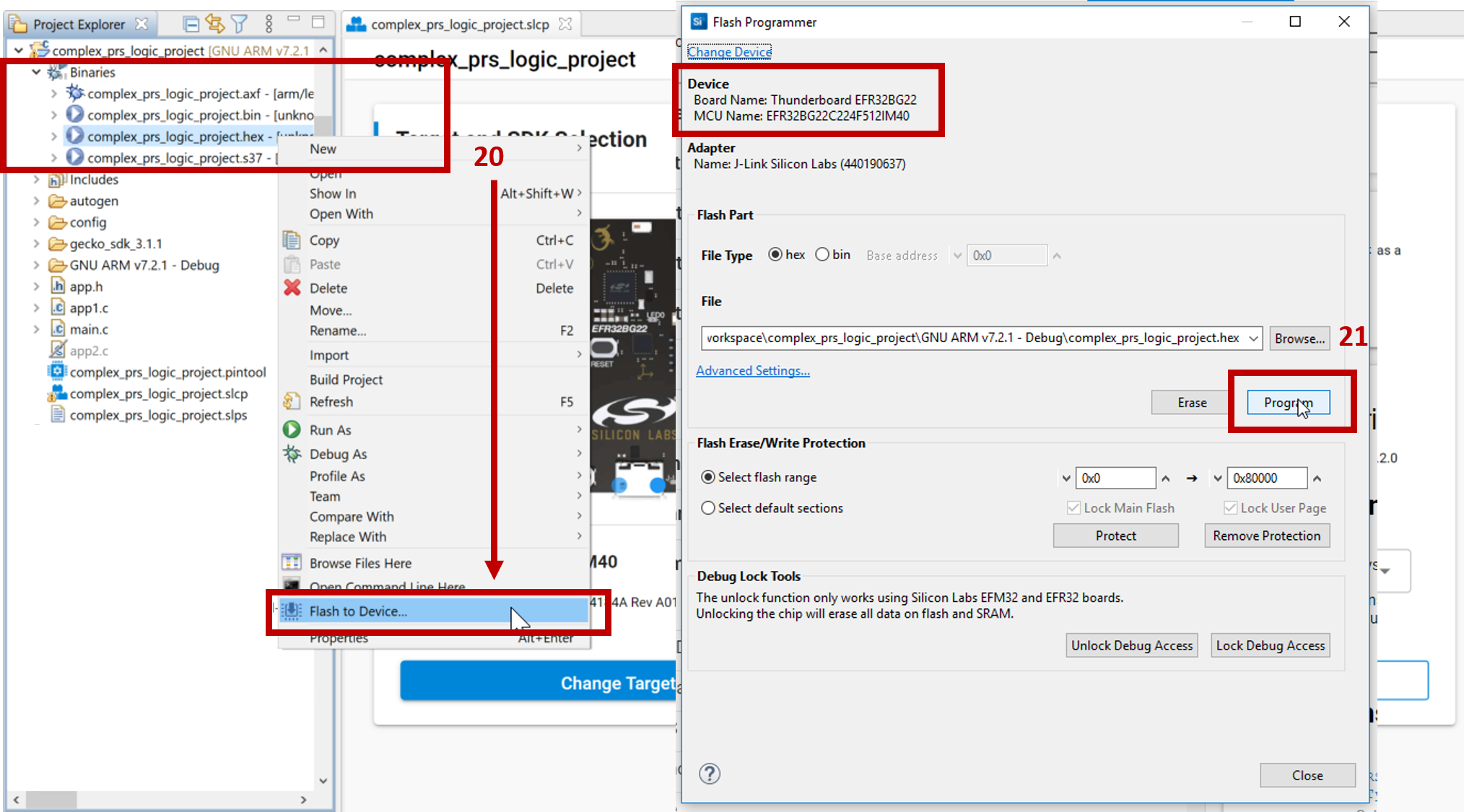 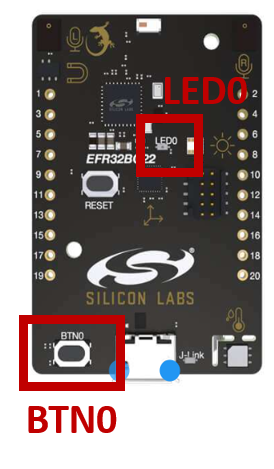 Lab #1 will demonstrate the XOR function of the PRS configurable logic with two inputs. The Thunderboard only has a single button for user input, push-button BTN0 located on the bottom left of the PCB's top side. The single push-button BTN0 will generate a quadrature encoder type signal as the two inputs for the XOR logic. The quadrature input will scroll through 4 different states as shown in the figure and table below. Each button press will scroll through the input sequence.

Let's look at app1.c to see how the project is configured.

Push-button BTN0 is configured as a GPIO input with an interrupt in line 78.

The push button's GPIO IRQ updates a static flag updateOutput every time the push-button is pressed.

The PRS Peripheral is initialized in line 53. Each input A and B is set as an Asynchronous Source Signal for their own PRS Channels.

Next the configurable logic function is defined with the two inputs. First, the PRS_Combine() API sets PRS_CH_B as a buffer where PRS_CH_B equals PRS_CH_B(in). Then PRS_CH_B is routed to the XOR logic input with PRS_CH_A(in). The resulting XOR output is PRS_CH_A.

Lastly, PRS_CH_A, the XOR output, is routed to the LED GPIO through the PRS.

Please note the selection of the PRS_CH_A channel which is defined in line 44. PRS_CH_A is assigned to PRS Channel 2.

The Thunderboard's LED is located at gpioPortB, Pin 2 on the EFR32BG22. Therefore, PRS_CH_A must be a PRS Channel between 0 and 5. EFR32xG22 Wireless Gecko Reference Manual Section 25.3.12.3 GPIO Pin Functions covers the allowed PRS Channels per GPIO Ports. As shown in the table, GPIO Ports A and B can only use Channels 0 to 5. GPIO Ports C and D can use Channels 6 to 11.

For Lab #2, exclude the app1.c source file just as before. See Excluding Source Files from Build section above. After app1.c is excluded from the build, include the app2.c that was excluded originally. Similarly, right-click on the app2.c file. Select Resource Configuration->Exclude from Build. Then choose De-select All and press OK. Project Explorer should show app1.c file named grayed out and app2.c normal. 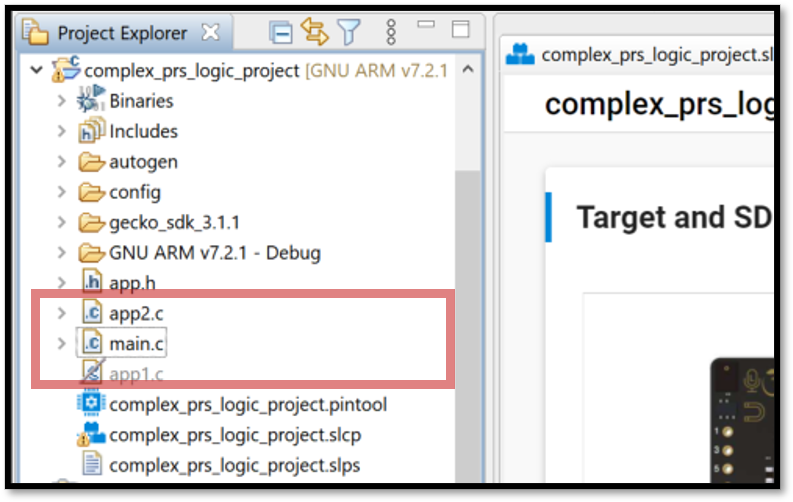 The source file app2.c shows how all the peripherals are configured.

The PRS output is not affected by the interrupt edge detection logic or gated by the IEN bits. The pin from which the output should be taken is selected in the same fashion as the edge interrupts. Figure 25.6 in EFR32xG22 Wireless Gecko Reference Manual Section 25.3.10 GPIO Interrupt Generation illustrates where the PRS output signal is generated.

The PRS Peripheral is initialized in line 110. The PRS_Combine() API can't be used for this scenario. As shown in Lab #1, the PRS_Combine() API sets the input B PRS channel as a buffer. In this lab, each NAND gate will have feedback from the other NAND gate's output. Therefore, the PRS Asynchronous Channel Control registers need to be set individually. The register and bit fields are show in EFR32xG22 Wireless Gecko Reference Manual Section 13.5.6.

First, the Reset signal is configured. We're using the RTCC with a 3 second period to generate a 1 msec clock pulse that is active high. The NAND gate SR Latch requires an active low input for both Set and Reset. Therefore, invert the Reset signal using the PRS logic function.

Next, in line 128, the Set signal is configured. The Thunderboard push-button is configured as the PRS signal source, therefore the SOURCESEL is set for Asynchronous GPIO where TB_BUTTON_PIN indicates the pin number used. We'll be using a NAND gate where the output of the inverted Reset signal is used as the other input.

Lastly, the output of the Set PRS logic is routed to the EFR's GPIO peripheral so it can drive the Thunderboard's LED.

Sensors are the eyes and ears of IOT applications. Let’s consider a small temperature sensor node with a NTC thermistor where the EFR can enable the ADC peripheral while in a deep sleep mode. The typical current needed to drive a thermistor is about 33uA assuming a 3.3V supply. If you were to drive the thermistor using the EFR’s I/O, you could reduce supply current by disabling the thermistor when it’s not in use. 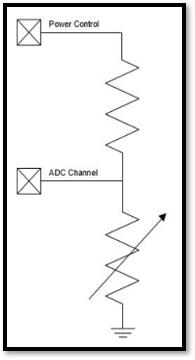 Duty-cycling the thermistor properly will maximize energy efficiency. EFR devices feature a Peripheral Reflex System (PRS), which allows each peripheral block to trigger another. In this example, the RTC would be used to trigger the ADC and enable the thermistor I/O via PRS to measure the thermistor voltage for a short period while sleeping for long periods in between. Ideally, the thermistor would only be active and consuming power while the ADC was sampling.

In low-power deep sleep applications, the EFR’s RTC would typically run off a 32kHz clock. If the thermistor I/O was enabled directly from the RTC event, the thermistor would be active for ~31 usec while the EFR’s minimum ADC sampling time is ~7 usec. This would result in the thermistor being enabled for ~24 usec longer than necessary. 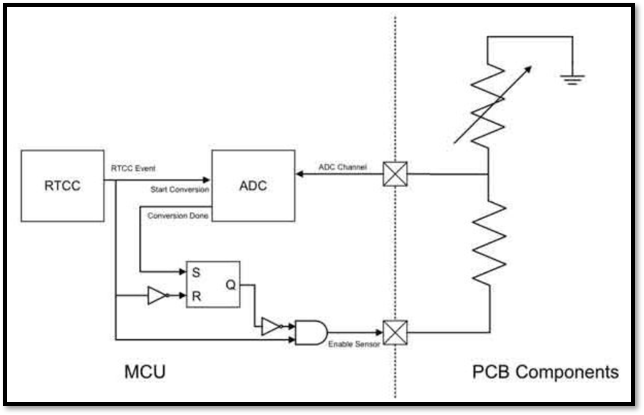 Initially, the latch output Q is low because the RTC event output and the ADC conversion done output are low. Whenever the RTCC event now goes high, the external sensor is enabled and the ADC starts taking a sample. Once the ADC is done, the conversion done signal goes high, setting the latch output Q high, which forces the external sensor off. When the RTC event signal goes low again, the latch is reset, making the system ready for the next event.

To learn more about maximizing energy efficiency with Silicon Labs EFR products, read Manage the IoT on an Energy Budget.