You are viewing documentation for version: 4.0 (latest) | Version History

Beginning with Bluetooth SDK v3.0, Silicon Labs’ Bluetooth stack supports CTE transmitting and receiving features and can take phase measurements on the incoming signal as specified by the Bluetooth standard. Note, however, that the determination of the angle of incidence from the phase measurements is outside of the scope of the standard and must be implemented in the application. To reduce the Time to Market for its customers, Silicon Labs also offers a reference implementation of a Bluetooth-based Real Time Locating System (RTLS), which provides both an out-of-box experience to evaluate the solution and a flexible framework that makes it possible for everyone to create their own RTLS. To get started with the reference implementation, refer to AN1296: Application Development with Silicon Labs’ RTL Library.

Users can also employ custom direction-finding algorithms on top of the Bluetooth stack. This requires deep knowledge in Direction Finding but enables even more flexibility. If you choose this approach, see AN1297: Custom Direction-Finding Solutions using Silicon Labs’ Bluetooth Stack.

Estimating the Angle of Arrival (AoA) or Angle of Departure (AoD) from IQ samples is not trivial, especially in a real environment full of reflections. To optimize development and to speed up time-to-market, Silicon Labs provides a Real Time Locating library (RTL lib), which processes the IQ samples received from the Bluetooth stack, implements multipath detection and azimuth and elevation calculation, and exposes the data to the application via an open API.

Furthermore, the library can also estimate the location of a tracked asset in a multi-locator scenario using triangulation, where multiple locators receive CTEs from the same asset tag, provided that the library knows the position of each locator. In this case, the positions of the locators and the estimated angles (AoA) serve as the input, and the estimated location is the output.

After the positions are estimated, user’s application has to determine how to process data.

The RTL library is provided as a single static library for each supported platform. The library can be found in the Gecko SDK suite under: C:\SiliconLabs\SimplicityStudio\v5\developer\sdks\gecko_sdk_suite\v3.3\util\silicon_labs\aox

The library has three API classes, as follows:

An IQ Sample Quality Analysis API is also available inside the Angle of Arrival / Departure and Utility Functionality classes to provide analytical measurements of different errors in the system.

Bluetooth has two direction-finding methods: Angle of Arrival (AoA) estimation and Angle of Departure (AoD) estimation. Currently, the RTL library supports AoA mode only. In this mode, the transmitter transmits a constant tone on a single antenna, and the receiver receives this signal on multiple antennas. Based on their spatial situation, the receiver antennas will receive the same signal with different phase offsets, from which the direction of the incoming signal can be estimated.

While it is easy to estimate the Angle of Arrival in an environment free of noise and reflections, it can get quite challenging in a noisy real-world environment with a lot of reflections. To mitigate the effects of reflections, the RTL library uses different methods, such as spatial and temporal filtering, averaging over multiple frequencies, and so on.

If there are multiple fixed-position locators that can calculate the direction of the transmitter (asset tag), the position of the asset tag can be calculated from the angles using triangulation. In addition to the Angle of Arrival estimation, the RTL library also provides location finding functionality. After the library learns the position of each locator and gathers the angles from each locator, it can provide a position estimation for asset tags. Just as for AoA estimation, challenges introduced by the reflective and noisy environment are addressed. 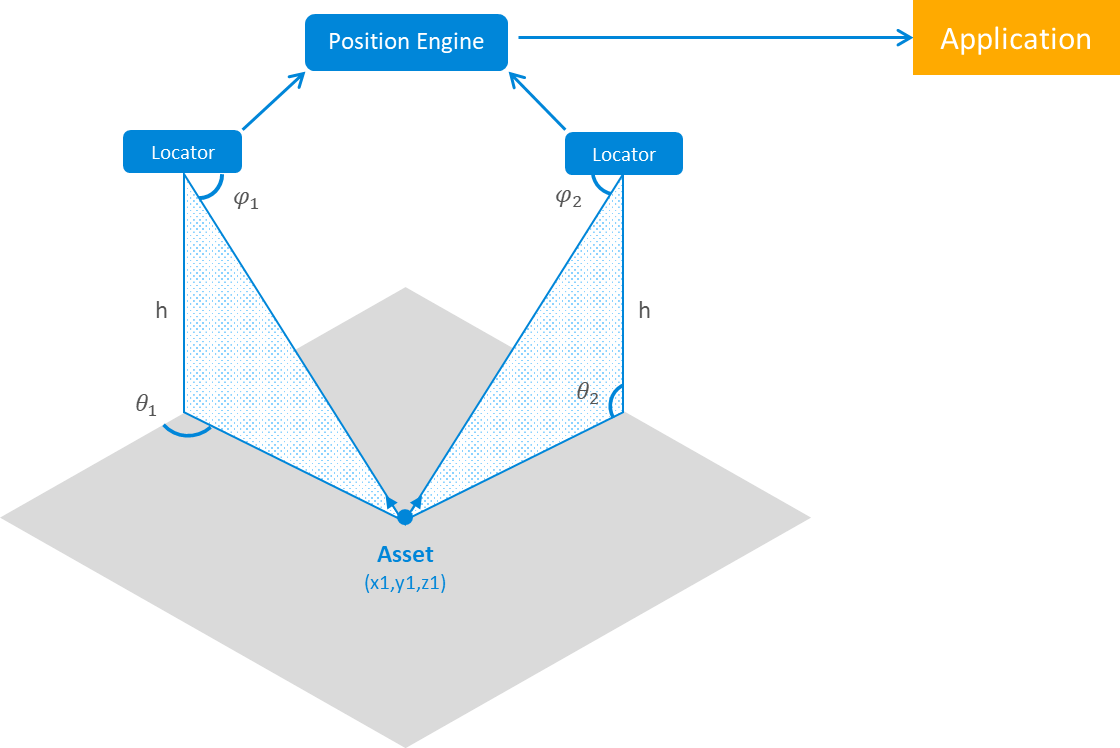 Errors from multiple sources can affect the quality of the received IQ samples. In a real-life environment, some phenomena are considered as normal and not errors, but can also corrupt the perceived IQ data. The most notable example of this is the multipath propagation, which twists the perceived magnitude and phase of the IQ sample data. Its extent depends on the particular antenna location in the array as well as the position and the angle of the followed tag related to the locator antenna array.

The possible sources for the perceived noise may include the following:

In other words, there are a plenty of sources for signal noise even in relatively good conditions. In addition to the calculation of Angle of Arrival and position estimations, the RTL library also provides functionality called IQ sample quality analysis to help developers find the root cause of angle estimation issues by analyzing statistical properties of the IQ samples.

Although it is up to developers to determine how the RTL library is used in the application, Silicon Labs offers a reference implementation of a Bluetooth-based Real Time Locating System (RTLS), which provides both an out-of-box experience to evaluate the solution and a flexible framework that makes it possible for everyone to create their own RTLS. The general architecture of this reference RTLS, using Silicon Labs RTL library, looks like this: 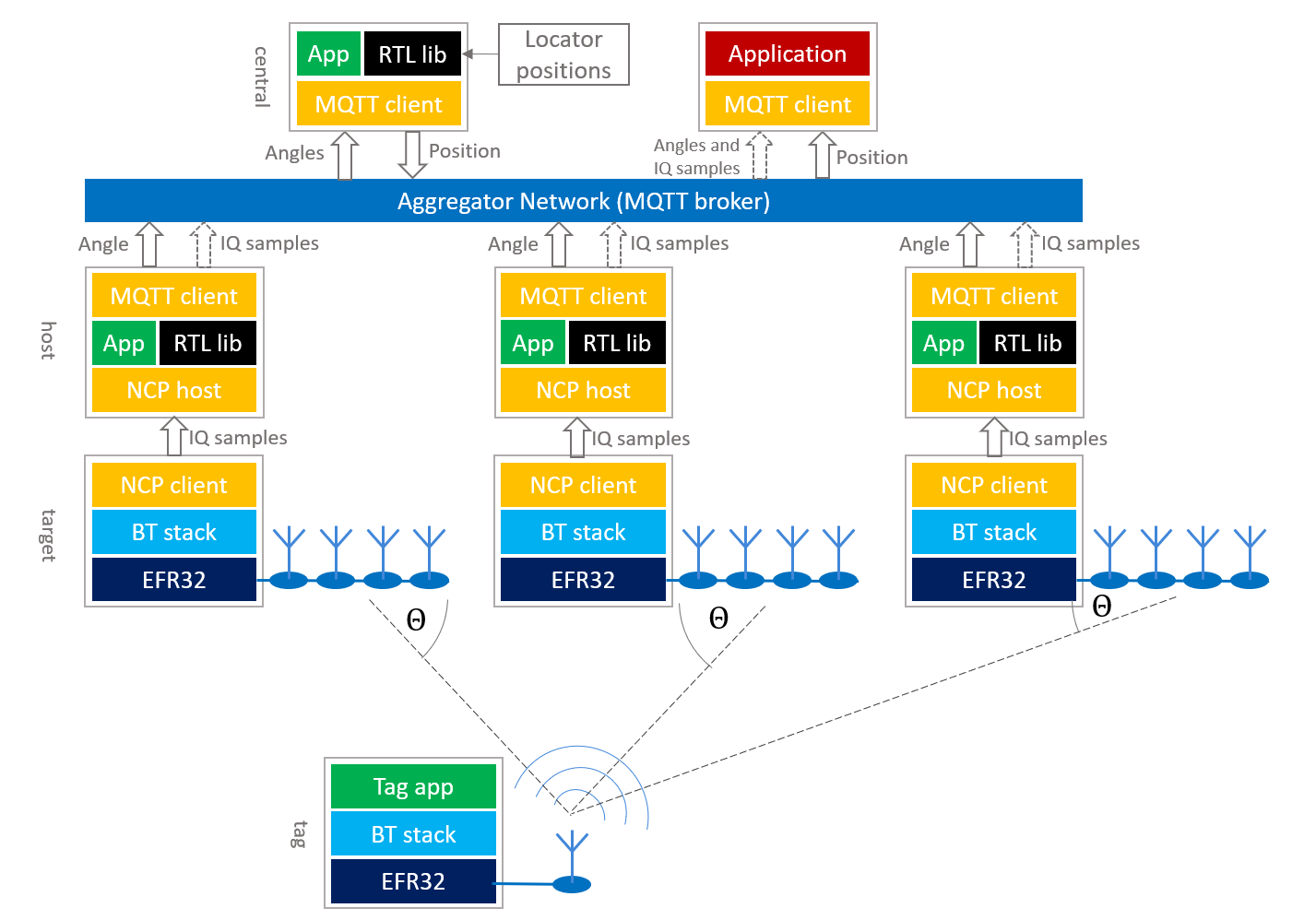 General RTLS Architecture as Implemented in the Bluetooth SDK

All AoA related sample apps in the Bluetooth SDK are created so that they support this model. To learn more about the sample apps, see AN1296: Application Development with Silicon Labs’ RTL Library.

Note that on the Locator side the devices work in a Network Co-Processor (NCP) mode, that is, the stack runs on the EFR32 chip, but the application runs on a host computer. Currently, due to the limited computational capacity of the EFR32 chips, only NCP mode is supported, that is the RTL library cannot be used on the chip. To learn more about NCP mode, see AN1259: Using the v3.x Silicon Labs Bluetooth® Stack in Network Co-Processor Mode.

The locators can connect to the central PC in many ways. Silicon Labs’ reference implementation uses MQTT to collect angle data from locators, since it gives the flexibility to run the host sample apps on a distributed network as well as on a single PC using localhost, but other implementations can also be used.