Getting Started with PC using AT Commands#

The fastest way to get started with the WiSeConnect™ software is to use a RS9116 Evaluation Kit (EVK) and PC with a terminal application such as Tera Term.

STEP 1. Connect the EVK to a PC using the USB interface labeled UART as identified below. 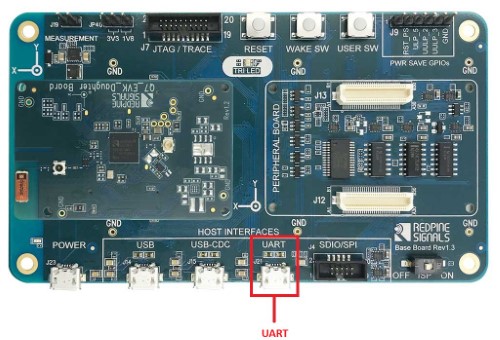 There are several USB connectors on the RS9116 EVK. For the purposes of basic evaluation using a PC, the UART port is recommended due to its low power consumption. Alternatively, the USB-CDC interface can be used to achieve higher throughput. When using the USB-CDC interface the basic operation outlined on this page remains the same. 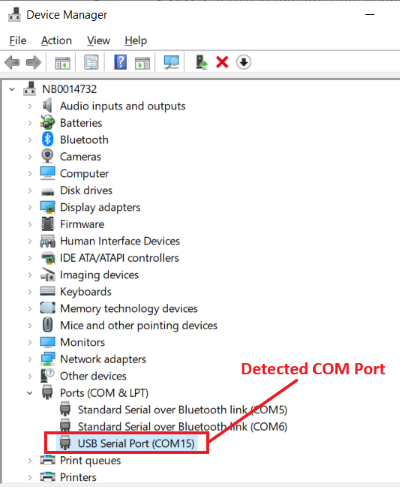 If this is the first time using the RS9116 EVK or if you recently downloaded a new version of the WiSeConnect™ Software Driver Package, the firmware that is currently installed on the EVB may be outdated and may require updating. The instructions below describe how to load and check the firmware version. For instructions on how to update the firmware see, Updating the RS9116W EVK Firmware

The console displays the bootloader menu after the characters |UU as shown in the following example.

STEP 2. Press 1 to load the default firmware. The console displays Loading... followed by Loading Done as shown in the example below. Note that 1 is shown twice as in 11 because both Tera Term and the RS9116 bootloader echo any character typed.

STEP 3. Query the version of the firmware by typing the command at+rsi_fwversion? as shown in the following console example.

When using these examples to evaluate power consumption please use the UART interface as described in Connect the EVK.

A complete list of examples and and instructions on running each example can be found in AT Command Examples.

It is recommended that you start with the Wi-Fi Station Mode Example.