You are viewing documentation for version: 5.2.1 | Version History

The Stream Editor provides details about individual events. However, in the case of really large captures, this may tax system resources. The Large File Editor shows an overall timeline and node statistics. It allows you to scan very large captures for areas of interest, which you can then open in Stream Editor. 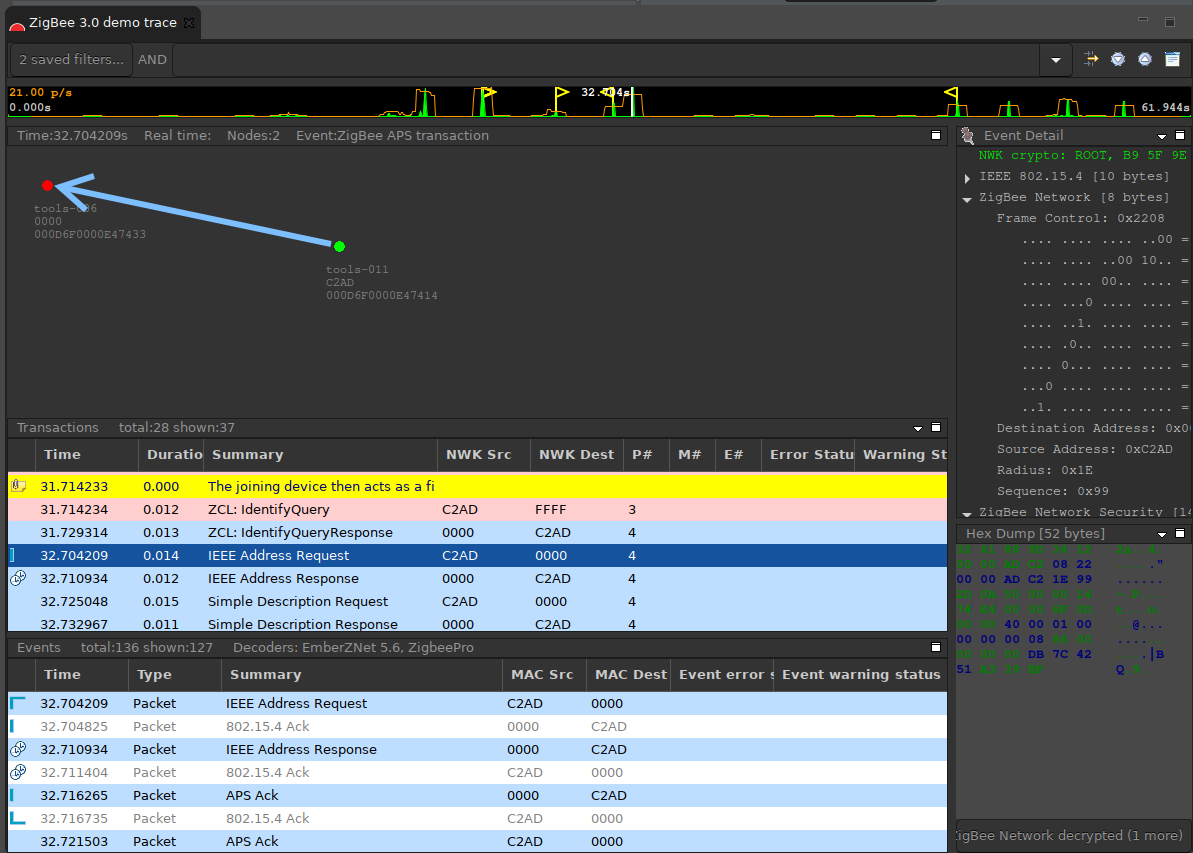 The Stream Editor contains five editor panes, each of which provides a different view of the captured session data:

All five editor panes may be open at once. Live captured data is continuously updated and displayed in the editor panes.

A Timeline Bar displays the statistics of the traffic over time.

Views are presented in a tabbed interface in the lower left of the default Network Analyzer perspective.

The following information is applicable to 15.4 networks only.

The Map pane shows all interaction between nodes at a high level. As events occur or are replayed, the Map pane refreshes to show the pattern of network communication. Debug messages issued from a node also display next to the node.

Each node in the map pane is given a different color depending on its capabilities within the network as they are understood by Network Analyzer based on captured data. 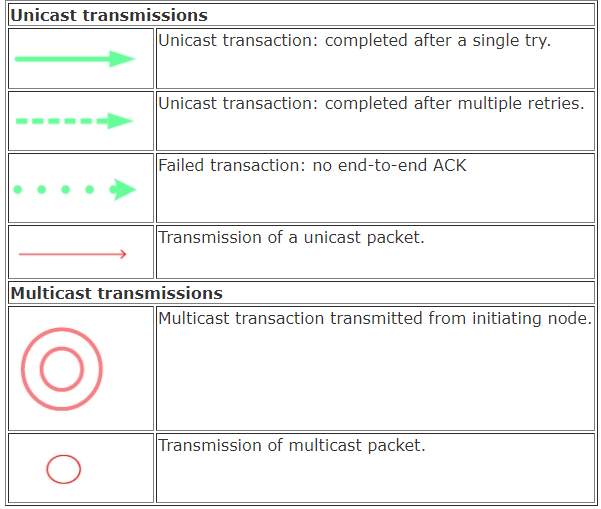 Note: The colors shown vary according to the transaction or event type, and can be configured through the Filter Manager.

The data that is shown for each node is managed through menu/toolbar options:

You can move node icons within the Map pane display. This has no effect on network functionality. However, it can help to highlight certain node interactions and relationships. When you move node icons in a session, Network Analyzer asks whether to save those changes before you close the session.

Right-click anywhere in the map pane to bring up a context menu.

Right-click on a node to bring up a context menu.

The Transactions Pane displays higher-layer protocol events that consist of multiple packet transmissions. For example, a Zigbee broadcast is retransmitted by every node in the network. By analyzing packet headers, Network Analyzer determines which packets belong to the same transaction and groups them accordingly.

Network Analyzer understands the protocol semantics for many transaction types. Therefore it can group multiple packets in real time to facilitate high-level analysis.

All transactions are listed in chronological order, using transaction start times. Each selection maps to one or more events in the Events Pane, which are marked accordingly. Clock icons indicate concurrent transactions with the current selection.

The Events pane displays information about packets received by the current session. All events are displayed in chronological order.

Events that belong to the currently selected transaction in the Transactions pane are marked by one of the following icons:

Clock icons mark unrelated events that are concurrent with the selected transaction in the Transactions pane. 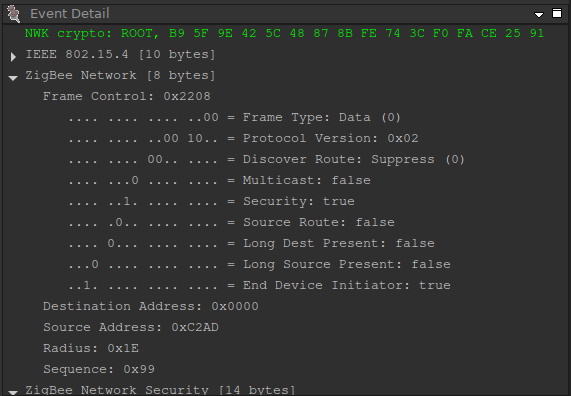 Pinning a field: The Event Detail pane has the ability to "pin" a field into view. When you double-click on a specific field, the Pin icon in the top left of the pane turns bright red, indicating that it is active. Now, as you move through events, this field is always visible when it is present in the currently selected packet. This is useful if you are interested in a specific field across multiple events in a trace file. In the above figure, the Zigbee Application Support Delivery Mode is "pinned" into view. The pin can be deactivated at any time by either double-clicking on the pinned field, or by clicking the Pin icon itself. 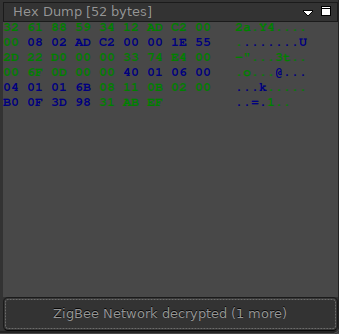 The Timeline bar shows bookmarks as yellow flags. You can click a bookmark to jump to it in the Transaction and Event panes. It shows red flags for errors, such as out-of-sequence problems.

The Radio Info view is a helper view that shows the information from the radio of all the receivers in the network that have heard the currently selected event. It is available through the tabbed Views interface in the lower left of the default Network Analyzer perspective. If not, add it through Window > Show View.

The view displays in a tree all the information that has been gathered from the receiver nodes. Displayed information includes LQI value, CRC value, and the status bits that show several states of the radio. 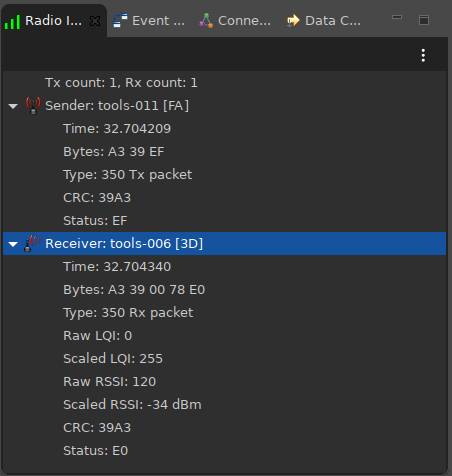 The event that supplied radio information in the figure above was captured from both the sending and receiving nodes. This is possible because the trace that contains this event was created by capturing from both the sending and receiving nodes simultaneously using Network Analyzer's Perfect Trace capability. While the original events were merged into a single event by Network Analyzer's duplicate detection mechanism, the radio information was retained for each event and is shown in the Radio Info view with the time that the event was captured by Network Analyzer.

Event Difference view is a helper view that displays the specific differences between two packets. It is available through the tabbed Views interface in the lower left of the default Network Analyzer perspective. If not, add it through Window > Show View. 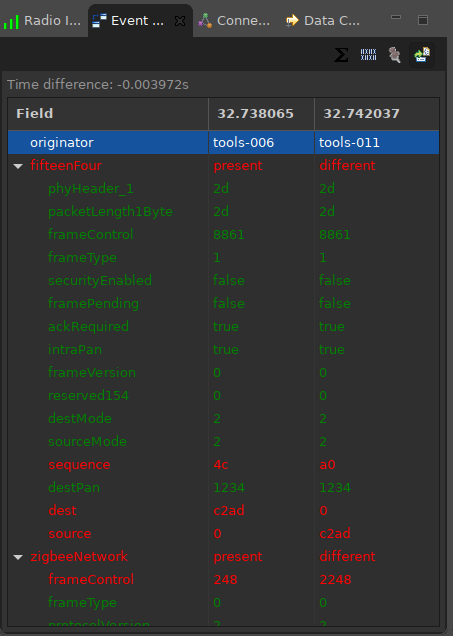 The menu at the top of the view supports additional functions.

Some of the Network Analyzer Toolbar functions are specific to working in the Stream Editor. 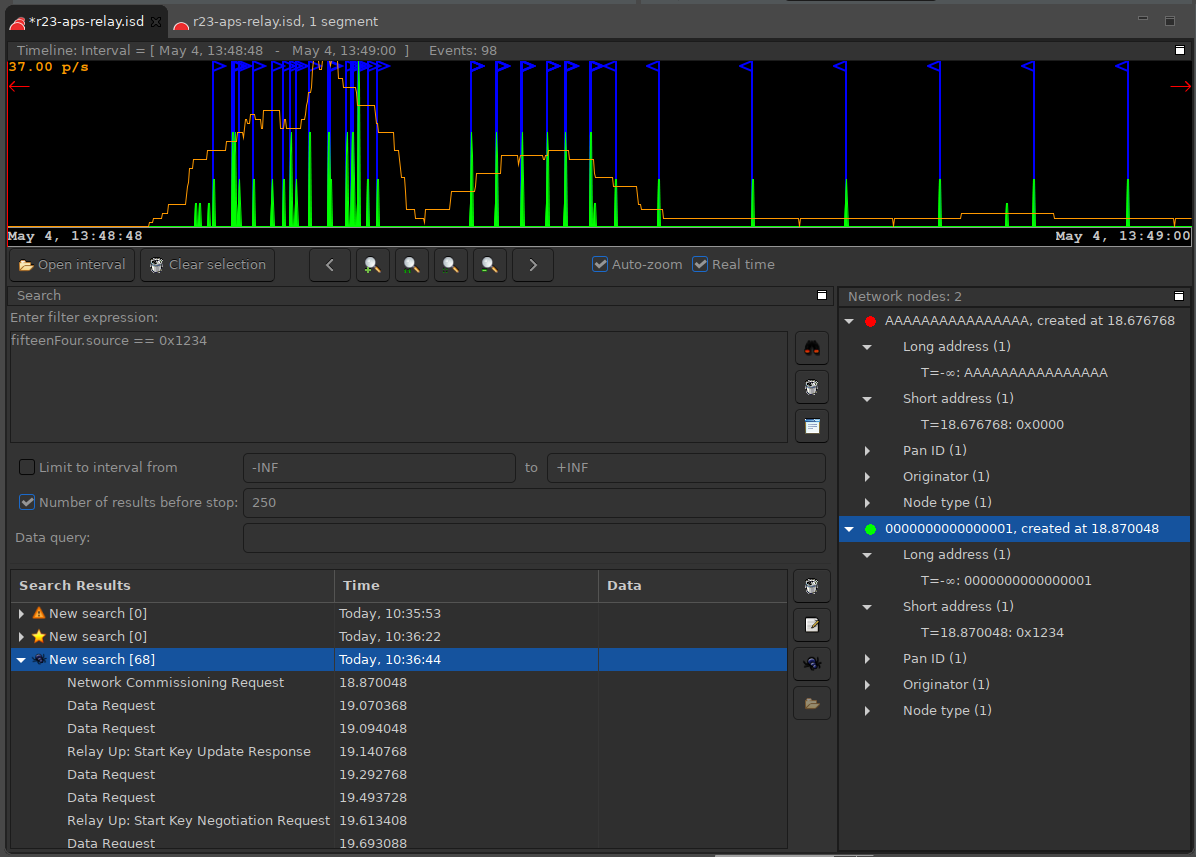 Moving the cursor to any point on the timeline displays the time for that point.

The click and drag operation creates the interval you defined, and zooms the timeline view into that interval. To clear the interval, click the Clear Selection button in the toolbar under the timeline, or right-click on the timeline and select Clear interval.

Once you have created an interval, you can open that interval in the Stream Editor by clicking the Open Interval button, or right-clicking in the timeline and selecting Open Interval.

Filter results are shown in the Search Results table. Search results are grouped into results trees and labeled with the time and date that the search was performed.

To view search result details, double-click an individual search result. This opens three segments in a Stream Editor: one before the selected event, one that contains the event, and one after the event.

The Large File Network Node pane shows all of the network devices included in a large file. The information provided about each node in a trace includes:

Since each of these values is subject to change over time, the summary also includes the time at which each value was discovered.