You are viewing documentation for version: 5.6.0 (latest) | Version History

If your application uses nodes operating on multiple networks, this information can be reflected when reviewing capture sessions. Currently, however, Network Analyzer cannot auto-detect multinetwork nodes. At the onset, unless all traditional, conceptual nodes constituting the multinetwork node are assigned EUI64s, each conceptual node shows up as a separate node in the Map editor pane. Each such node must be assigned the same EUI64 by right-clicking on the node in the Map editor pane and selecting Assign EUI64… A dialog pops up that facilitates the assignment, and the Multinetwork EUI64 checkbox must be checked to inform Network Analyzer that the node is indeed a multinetwork node. This sequence is illustrated in the following figure. 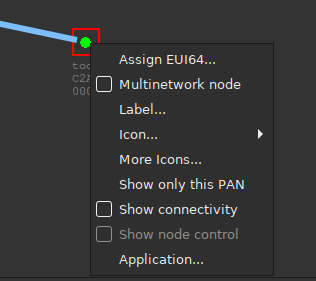