This application demonstrates the procedure to connect RS9116W to an Access Point. Once connected put the module in low power (WLAN standby associated) state.

To do this you will perform the following:

Note: To measure lowest possible power, it is recommended to use UART to issue commands. It allows device to go to its lowest power states. USB-CDC keeps the USB port alive, and USB is not a low power interface.

Your current meter’s positive and negative terminals should be connected as shown in the picture below. This picture also shows the connection of the USB cable between your PC and the EVK board 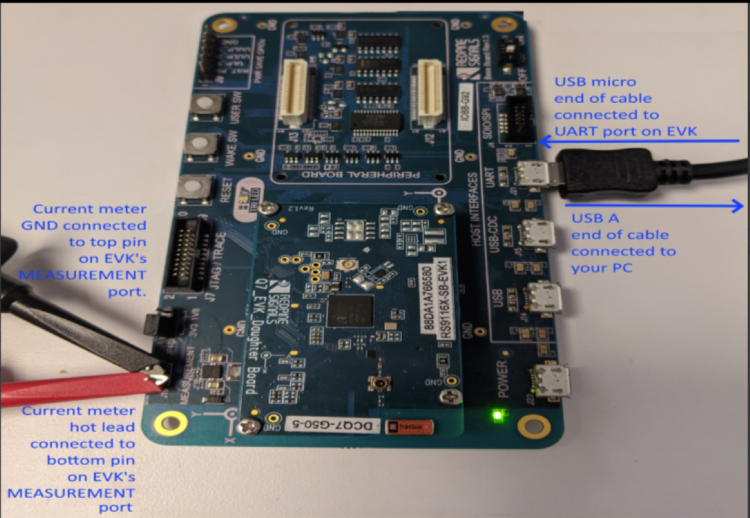 Before continuing, ensure the RS9116 EVK is plugged into your computer and TeraTerm is connected as described in Getting Started with PC using AT Commands.

After doing so, start your current meter in continuous DC current measurement mode with a range of 1 A.

As an example, the Keithley DMM6500 current meter was used. It is set as shown below using its PC-based Kickstart interface software.

STEP 1. Once the current meter is set to do the measurement, reset the RS9116 EVK. 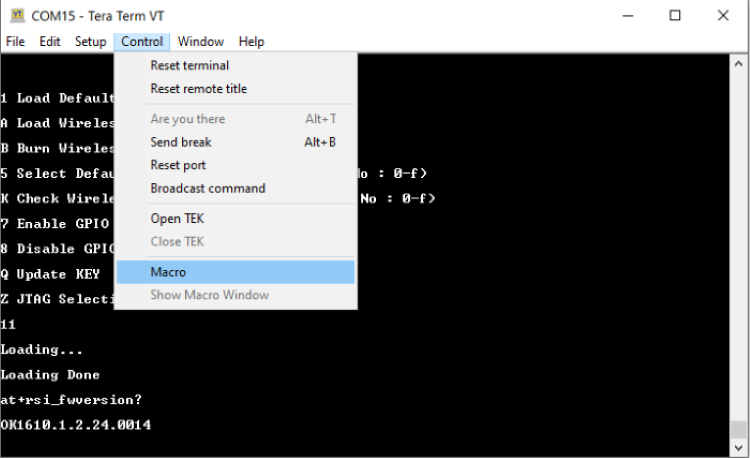 STEP 3. Navigate to the folder <SDK>/examples/at_commands/teraterm/wlan_low_power and select the file low_power_station.ttl.

STEP 4. After running wlan_low_power_station, it will pop up as shown.

STEP 5. Initially, the ABRD process will run and you will see a pop-up as “Firmware Loading Done “. 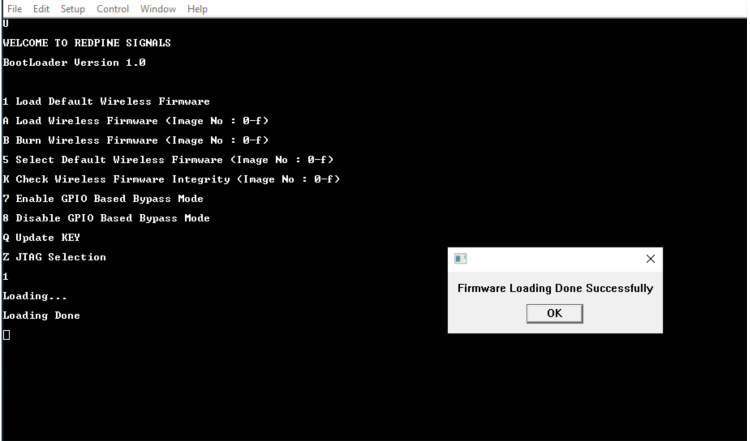 STEP 6. You will see the following pop-up window 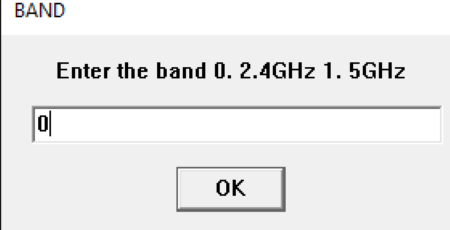 STEP 8. You will see the following pop-up and message in the Tera Term screen 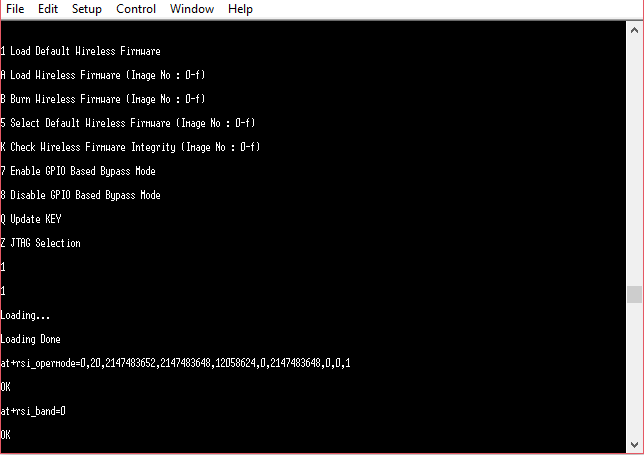 STEP 9. at+rsi_init command initializes the RF of the module. The module responds with OK<MAC_Address> (can be seen in Hex)

STEP 10. Pop up comes to provide input for SSID of the AP to be connected, select 'OK' to proceed (make sure SSID is entered correectly)

This command scans for particular Access Point operating in all channels. The module responds with information of the Access Points scanned.

The data received might have some unreadable characters because of ASCII conversion. 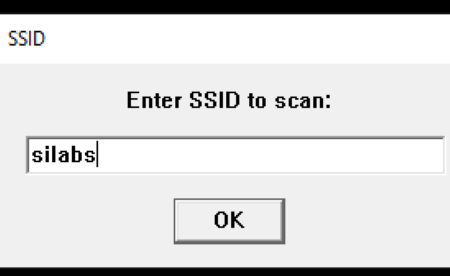 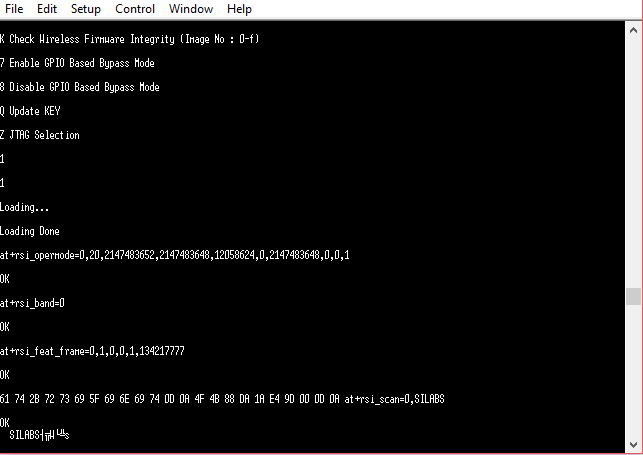 STEP 12. Next pop up asks for pre shared key (PSK) input from the user, enter the PSK of desired Access Point and hit 'OK',

STEP 13. Now you will see the following pop-ups in succession (click “OK” on them)

STEP 14. After the Tera Term macro completed, you will see a command sequence similar to the one shown below having been executed in Tera Term. 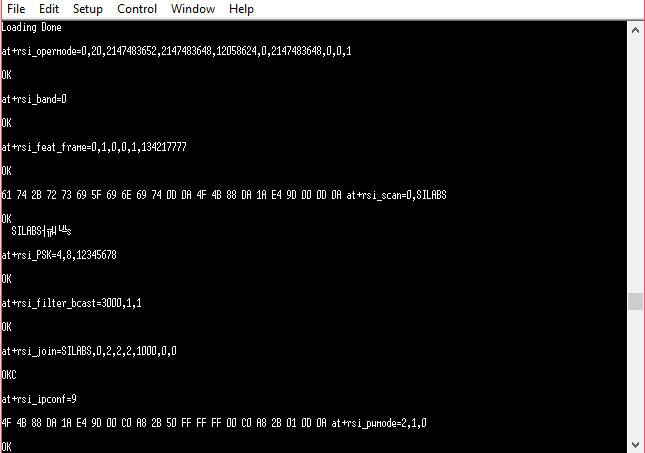 STEP 15. At this point the device is in power save (standby-associated) mode. 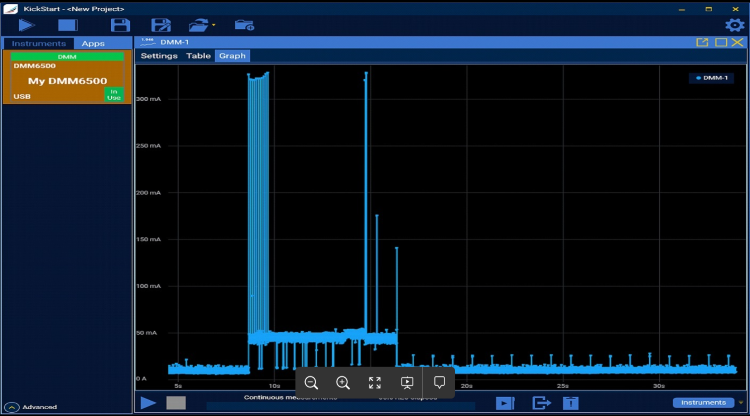 Note: The measured current may vary if the scenario is performed in Open Environment. AP to AP variation is also observed.