The Z-Wave over IP Gateway (Z/IP Gateway) is a device providing a layer above the serial API, and the Z-Wave protocol running on the Z-Wave module. It allows internet "Z/IP clients" connected over the Internet Protocol (IP) to contact and control nodes in a Z-Wave network. 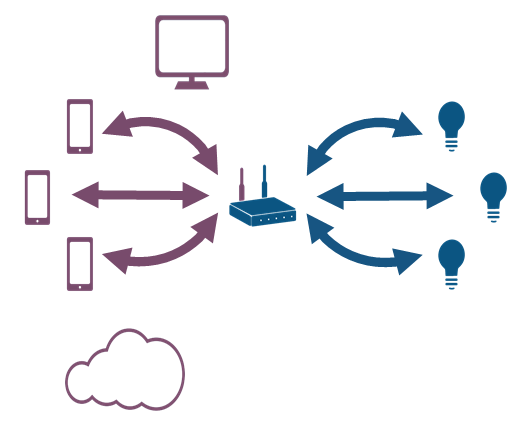 Z/IP Gateway works in both IPv6 and IPv4 environments. The recommendation is to use IPv6, as IPv4 is subject to certain limitations. In an IPv6 environment, the Z/IP Gateway has a preset IPv6 address and creates a separate IPv6 subnet for the Z-Wave nodes with a preconfigured IPv6 prefix. 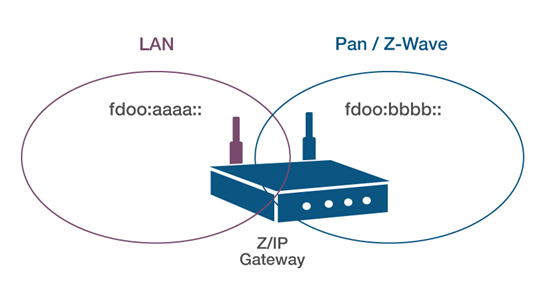 On the left-hand side, a LAN with a Z/IP Gateway-shared prefix is shown. This allows all IP hosts on the LAN to reach Z/IP Gateway, which acts as an IP router for the Z-Wave nodes on the PAN side.

To configure the IP hosts on the network, Z/IP Gateway will, in an IPv6 environment, transmit router advertisements for itself as a router telling other hosts on the IP network within the same broadcast domain, that it provides access to the Z-Wave subnet. If these hosts accept these router advertisements, they will autoconfigure an IPv6 address that has the same prefix as Z/IP Gateway, allowing them to communicate directly with Z/IP Gateway itself.

In comparison to IPv6, IPv4 does not have router advertisements. This prevents Z/IP Gateway from automatically notifying an IPv4 the Z-Wave subnet is available through a the Z/IP Gateway. Instead, Z/IP Gateway requests a DHCP lease from the DHCP server on the network on behalf of each Z-Wave node in the Z-Wave network. This places all nodes on the Z-Wave network in the same IPv4 broadcast domain and subnet as the gateway itself and any other host on the same IP network. The problem with this approach is that most consumer routers are configured with a small pool of DHCP addresses. Typically, they are configured to less than 100 hosts, and some may even not allow the user to reconfigure them with a larger pool. In a normal home network, 20-40 hosts may already be present so adding the Z-Wave nodes on top of this, may cause the local DHCP server to run out of IPv4 addresses, causing Z-Wave nodes or IP hosts to go offline. For this reason, IPv6 is recommended, especially when bridging to larger networks or network segments beyond the physical gateway device.

When Z-Wave traffic is relayed over IP, some concepts that are essential to Z-Wave, do not have an equivalent on IP:

To convey this information, the Z/IP encapsulation layer is used. 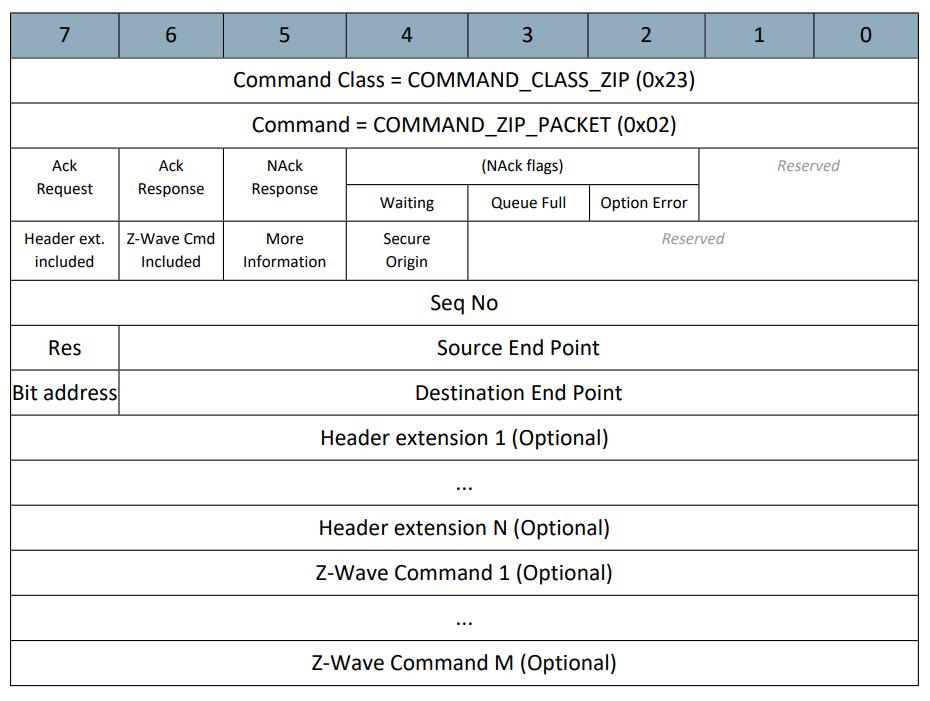 The option bytes are followed by 3 byte fields:

Z/IP Gateway maintains a resource directory, which lists the resources on the Z-Wave network. When a Z-Wave node is included into the network, the Z/IP Gateway will probe (or 'interview') the node for information about its capabilities. This process is similar to the interview process of the PC Controller but Z/IP Gateway probes more, and deeper. It probes for the following data types:

A Z/IP client can discover the gateway either through multicasting a COMMAND_NODE_INFO_CACHED_GET, as An IPv4 broadcast, or through an IPv6 'all routers multicast' packet. In either case, this command is sent without any encryption. All Z/IP Gateway(s) receiving a 'Node Info Cached Get' will respond with COMMAND_NODE_INFO_CACHED_REPORT enabling the Z/IP client to enumerate the gateways available on the IP network.

An alternative method is listening for mDNS, which allows Z/IP Gateways to broadcast their presence to the network.

As an alternative to command class node discovery, a Z/IP client can use a mDNS listener. Z/IP Gateway will announce all nodes and multichannel endpoints in the network on mDNS which a client can capture using this listener.

All information is cached by Z/IP Gateway in the resource directory, so even if a node is offline or sleeping, the Z/IP Gateway can still provide cached information to any Z/IP Client sending a COMMAND_NODE_INFO_CACHED_GET.

Avahi browse can be used to display mDNS traffic. In the example below, it is used to browse for _zwave._udp, adding the r flag to resolve addresses, and the v for verbose. In this example, a number of Z-Wave devices are available on the network.

The Z-Wave devices are announced on the IP network using both IPv6 and IPv4. The host name, a hex string in brackets, is composed of the home ID, the node ID and the multichannel endpoint. From this example, it can be seen that: 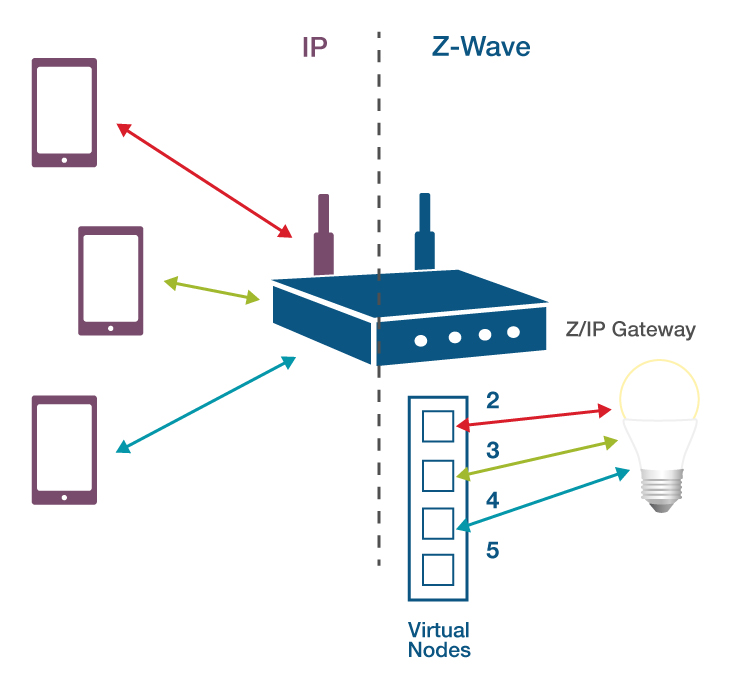 This allows Z/IP Gateway to separate traffic returned from the Z-Wave node, and forward it to the correct IP destination based on the virtual node to which return traffic is addressed. The temporary IP association is bound to the source socket, and the destination node ID. This means that the virtual node IDs change when the IP socket used by the Z/IP client changes. Depending on the client, this may occasionally occur. After an amount of time with no communication, temporary address associations time out and are freed for reuse.

The other type of IP associations are persistent IP associations. The common example of this is the “unsolicited destination”. Most Z-Wave nodes transmit frames, without them having been explicitly requested. An example of this is a motion sensor that transmits when it detects motion. It will send a notification report on the lifeline associations group without the controller having explicitly requested this report. A client that desires to monitor unsolicited reports must first configure the Z/IP Gateway with an unsolicited destination address, which is used as the destination address for these frames. 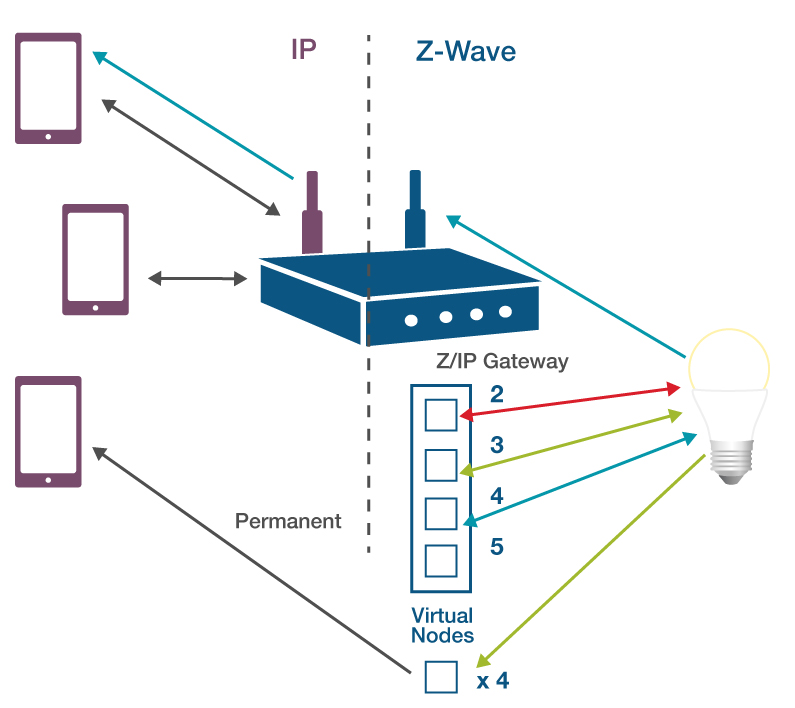 Z/IP Gateway maintains data about network performance. In Z-Wave terminology, this is typically referred to as “IMA” for Installation and MAintenance. Z/IP Gateway allows for collecting and capturing:

Z/IP Gateway supports encryption on the Z-Wave RF interface through the command classes security 0 and security 2.

In the same fashion, when Z/IP Gateway receives frames from the Z-Wave network, it strips off the S2 or S0 encapsulation, and provides this information to Z/IP clients via a header extension that describes which key class was used. The Z/IP client can then tell whether the frame was sent on the correct key class for that device.

Security – IP on with Local Connectivity#

On the IP side, frames are encrypted with DTLS rather than S0 or S2 encapsulation present on the Z-Wave network. The traffic is secured using a preshared key, which is made known to Z/IP Gateway and the Z/IP client out of band.

The option of using no security on the IP layer also exists. This is typically intended for applications like embedded Linux controllers, where the Z/IP traffic is generated locally (for example, through a webserver running on the gateway) on the internal logical network interface such that no Z/IP traffic exits the device. For obvious reasons, using an unsecured IP layer is not recommended for cases were the Z/IP Client exists off of the Z/IP Gateway's internal network. 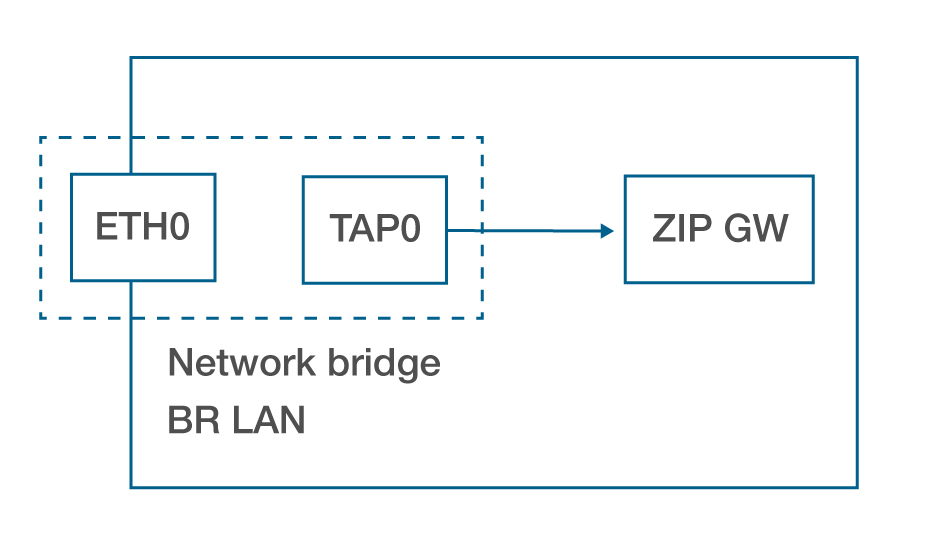 The outline box that contains the other components represents the 'host' hardware platform, for example, a Raspberry Pi. This setup is the default configuration for Z/IP Gateway, which allows the host itself, as well as any devices connected to the LAN to communicate with Z/IP Gateway. This is achieved by bridging the Ethernet interface with the logical TAP interface created by the Z/IP Gateway. In this configuration, the Ethernet interface has no IP addresses, while the br-lan bridge interface has both an IPv4 address and an IPv6. The bridge interface serves as a layer 2 device like an Ethernet switch. This configuration is supported by the provided Debian package installer.

This installation the most widely used in development because it is incredibly useful for debugging purposes. It allows for Z/IP clients running inside or outside the host platform as needed, and it provides good options for capturing IP traffic using TCPdump or Wireshark. 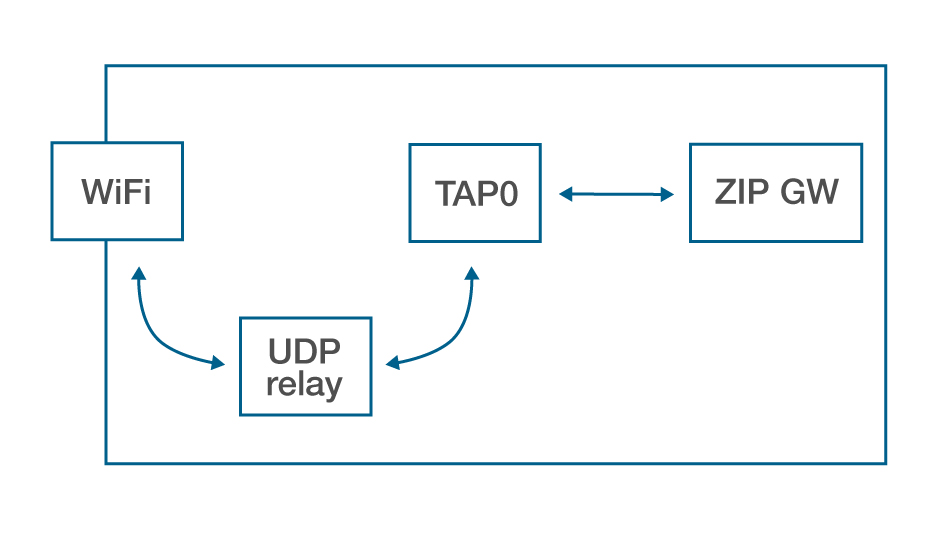 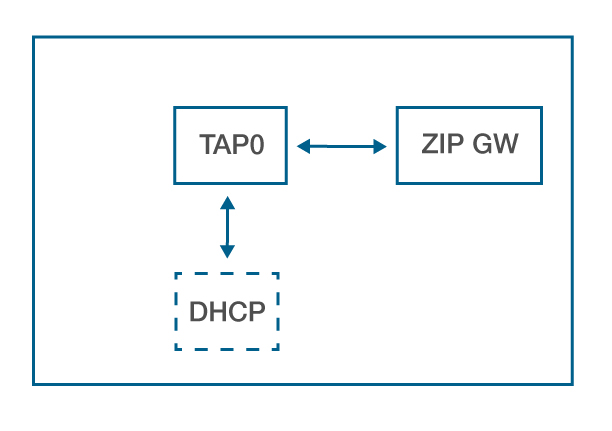 Although it is not supported by the Debian package installer, the third configuration is the most common in finalized products. In this configuration, the Z/IP Gateway has no connectivity to the outside world. Instead, it connects to the logical TAP interface, which has an IPv6 with the same prefix as Z/IP Gateway. Optionally, there may be a DHCP server on this host that provides IPv4 addresses for Z/IP Gateway and the Z-Wave nodes. The main application for this configuration is a system where the Z/IP client is running on the same host as Z/IP Gateway. An example is Z-Ware, or another webserver, running on the same host as Z/IP Gateway. In this case, outside communication passes through the web UI and Z/IP traffic to other (remote) clients is not present.

Z/IP Gateway ships with comprehensive documentation written in Doxygen. When opening the documentation, note the left-hand pane where there is a Z/IP Gateway user guide that has information on compiling, installing, and troubleshooting the Z/IP Gateway; specific details and procedures regarding firmware update, migration from previous versions, RF settings for the Z-Wave module; and more.

Prior to installing the Z/IP Gateway, the location of the Z-Wave module on the host is required. To find the Z-Wave device, run the following command after connecting the module to the host: 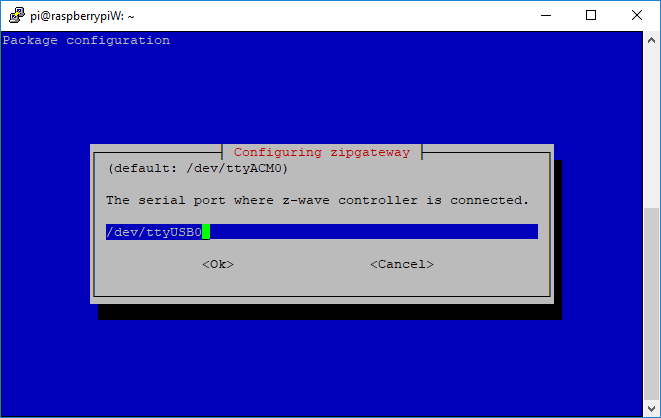 The installer will prompt the user for the IPv6 addresses of Z/IP Gateway. The recommendation is to use default addresses unless on a network with multiple Z/IP Gateways, leading to multiple hosts with the same address.

The same goes for the Z-Wave PAN prefix; run with the default unless multiple Z/IP Gateways on the same network. Setting the IPv6 addresses 0::0, will cause them to be autogenerated, preventing collisions but making it harder to identify the Z/IP Gateway. 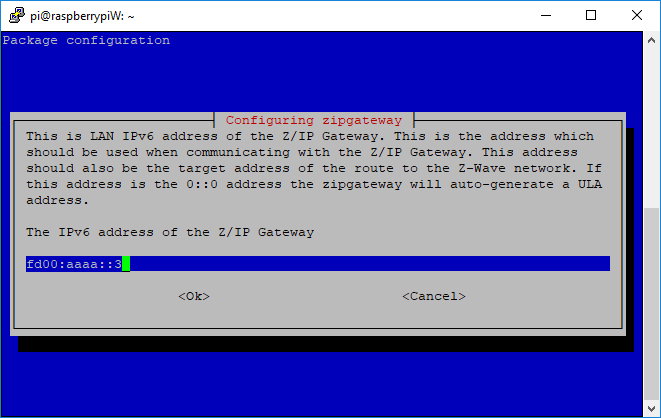 When selecting the network interface, ensure that it matches the type selected in the previous step. 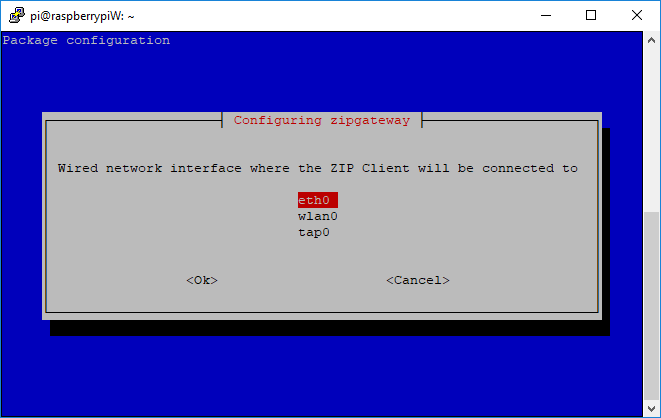 PyZIP is a lightweight multiplatform Z/IP client written in Python. It is fairly limited in terms of command classes supported and is manually driven with no automation. PyZIP is also not Z-Wave certified. However, due to its lack of automation, PyZIP is a very good tool for manual testing.

The PC Controller is a Windows OS application is more fully-featured than PyZIP. It provides much of the mandatory functionality that required to have a working Z-Wave network:

This means that it is far more advanced than PyZIP, but it only runs on Windows. The PC Controller is also intended as a test tool, so it allows for actions that are not allowed within the Z-Wave spec, and is thus not certifiable.

Z-Ware is both an SDK and a finalized controller, with many APIs at different levels. Two of these should be emphasized: