Simplicity Studio® 5 (SSv5)'s Network Analyzer enables debugging of complex wireless systems. This tool captures a trace of wireless network activity that can be examined in detail live or at a later time. 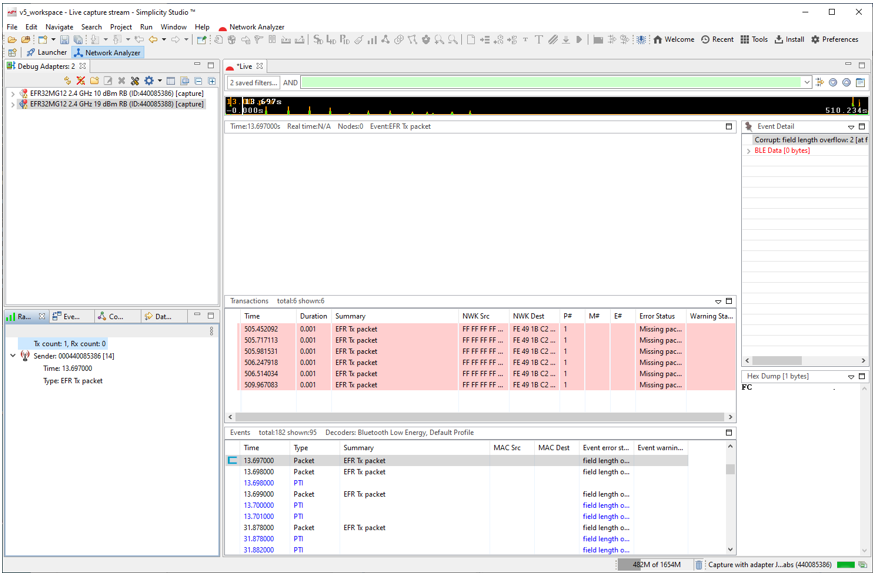 More than simply a packet sniffer, the Network Analyzer works with the data sniffer interface on the Silicon Labs wireless chips to provide direct feedback from the baseband radio of each device, allowing any supported radio to report detailed packet transmission and reception data, such as timestamps, link quality (or LQI), receive sensitivity (or RSSI), and CRC pass/fail results, all without any software overhead.

With SSv5, any PTI-enabled Silicon Labs platform can record the radio activity regardless of the application firmware that is being used, so there’s no need to have a dedicated sniffer device installed to catch the traffic. The Network Analyzer also enables capture from multiple sources simultaneously into the same log file without falsely duplicating packets. This enables the developer to compare how well different radios in the network heard the same transmission.

In cases when detail is not desired, Network Analyzer makes it easier to understand the workings of a complex wireless protocol. Related packet events are automatically grouped into a Transactions pane within the capture view, allowing for quicker parsing of what’s happening during that portion of the traffic log. Quickly access statistics like total duration, number of related packets, number of point-to-point and end-to-end retries, and unexpected conditions like requests with missing responses or deliveries where expected acknowledgments are missing.

Editor views provide different views of capture session data. Up to five editor views can be open at any one time:

You can capture data from the nodes of any connected debug adapters, either from one node at a time, or from multiple nodes simultaneously. You can also capture all network traffic over the current channel by capturing data from a connected sniffer node.

Note: The types of data captured depend on the capabilities of the node's radio chip and debug adapter.

Capturing from a Sniffer Node

You can capture data from multiple nodes simultaneously. This is typically done for nodes that belong to the same network. Network Analyzer captures all incoming and outgoing packet data through the selected debug adapters, whether or not the host nodes have sniffer applications. The data includes failed transmissions, and debug messages from node applications that are compiled in debug mode.

Capturing from all nodes in a network yields a perfect trace session. The session data compiles all incoming and outgoing data from each node in chronological real time, providing a richly layered view of all activity within a network. This can be especially useful for debugging a network while it undergoes development.

Note: A sniffer capture intercepts all over-the-air transmissions among network nodes; however, the sniffer cannot detect any data transmissions that are known only to their senders such as messages that fail to arrive at their destination, and debug data such as API traces. These are captured in a perfect trace session. 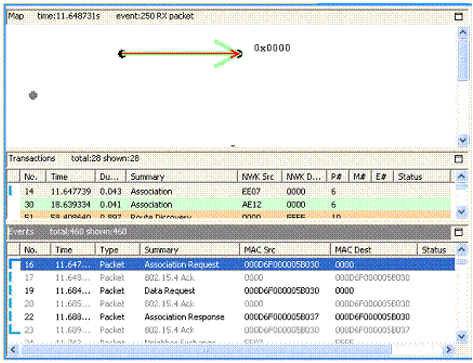 The toolbar's link connectivity button lets you view connections between network nodes. The connectivity diagram shows cumulative connections up to the current event. The following figure shows connections that were established between the network's three-nodes as of Event 52: 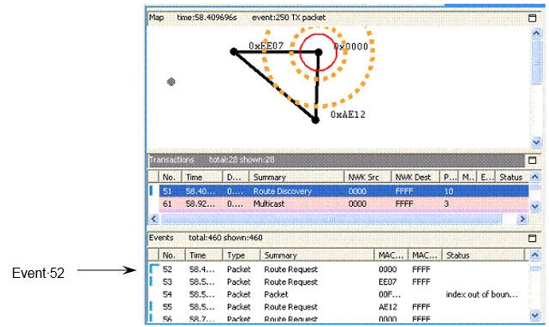 You can view the contents of an individual packet in the Event Detail and Hex Dump editor panes. These display packet data in decoded format and raw bytes, respectively. For example, Network Analyzer shows the Association Request data for Event 16 in the following figure. 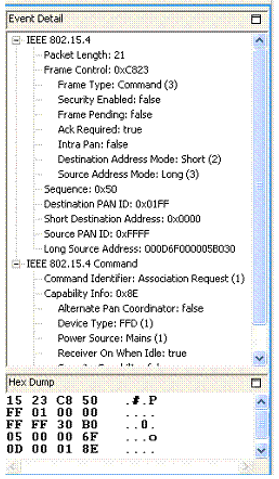 By default, the Events pane displays all session events. You can build and apply filters that constrain Network Analyzer to show only events that are of interest. By filtering events, you can analyze results more efficiently.

Network Analyzer also provides several preset context-sensitive quick filters that are available from the Transactions and Events editor panes. You access these filters by right-clicking an event or transaction and choosing a context menu option.

The quick filter options that are available depend on the transaction or event you select. You can specify to hide all events/transactions of the selected type, or to show only that type. Further, if you select an event such as a neighbor exchange that has a source and/or destination address, the context menu also contains options that let you filter events according to that address. This lets you isolate data for a given node.

It is often useful to hide messages that are not relevant to the current analysis. For example, you typically don't need to view neighbor exchanges-stack-level messages that are exchanged among nodes. By default, the Filters menu has a single saved filter option, Hide Neighbor Exchange, which the Filter Manager defines as follows:

By choosing this option, Network Analyzer hides all neighbor exchange messages from the Events pane. You can customize the Filters menu to include other saved filters. You can also set filters manually in the filter bar.

You might want to isolate all messages for a given node, for one of the following reasons:

To show only traffic for a given node:

For example, to view only events from node AE12, as shown in the following figure:

The filter bar shows a filter expression like this: 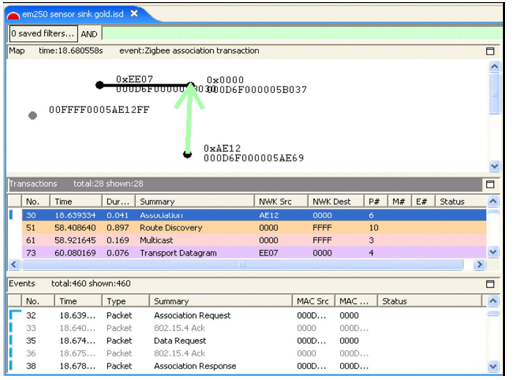 You can further refine the filter by ANDing it with other conditions. For example, you can specify to hide all neighbor exchange messages from this node by choosing the menu option Filters | Hide Neighbor Exchange, as shown in the following figure. 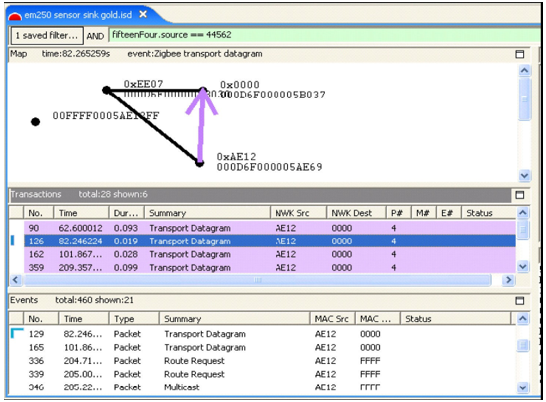 By doing this, you can determine node-specific data, such as how many non-neighbor exchange events originate from that node and the intervals between them. After analyzing data for that node, you can clear all current filters and set filters on other nodes, to compile their data and activity.

Note: Filters are helpful for isolating network issues, such as quickly ascertaining when a node stops sending data. However, to analyze an event in the context of network operations, you must clear all filters. 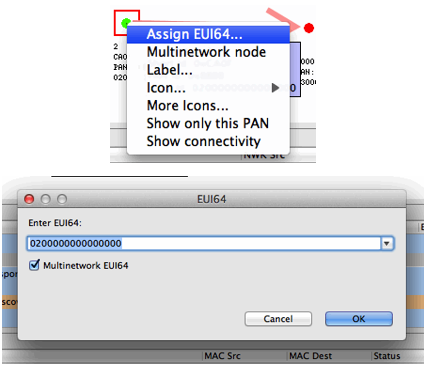 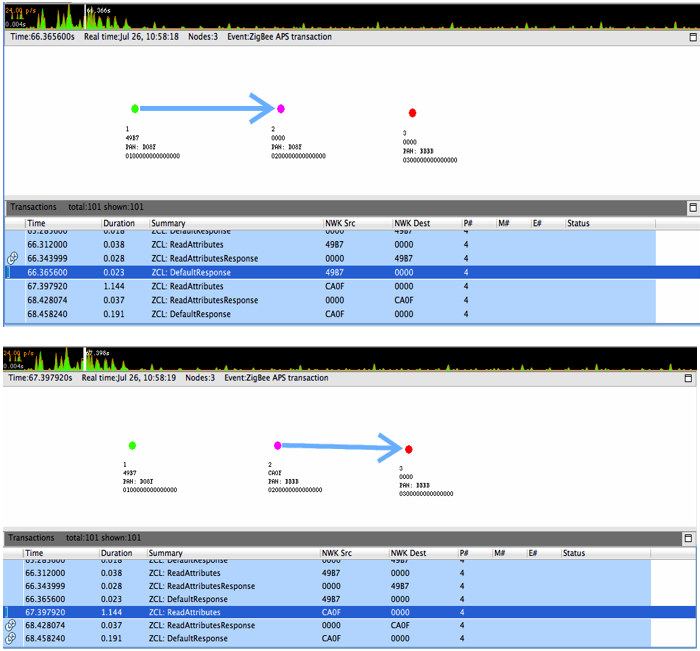