Capture and Analysis of Z/IP Traffic#

This lab exercise explores how to capture and analyze Z/IP frames over IP using the Wireshark tool This exercise is the fourth exercise in the ‘Z-Wave Controller Training Course’ series. In it, you will learn how to do the following:

This exercise demonstrates how to capture traffic on the IP interface decrypt the traffic and parse the payload.

Familiarize yourself with the protocol by referring to the following items:

Further, the participants should have completed

Participants should be familiar with connecting to the Raspberry Pi.

Enable non-root users to capture packets when prompted. By default, not all users are allowed to capture traffic, so the current user needs to be added to the Wireshark group:

Next, log out of the Raspberry Pi from the start menu and log in again to activate the changes made to user groups.

From the Raspberry Pi start menu, select “Internet” and “Wireshark”. On the initial screen, double click the “tap0” interface to start capturing traffic: 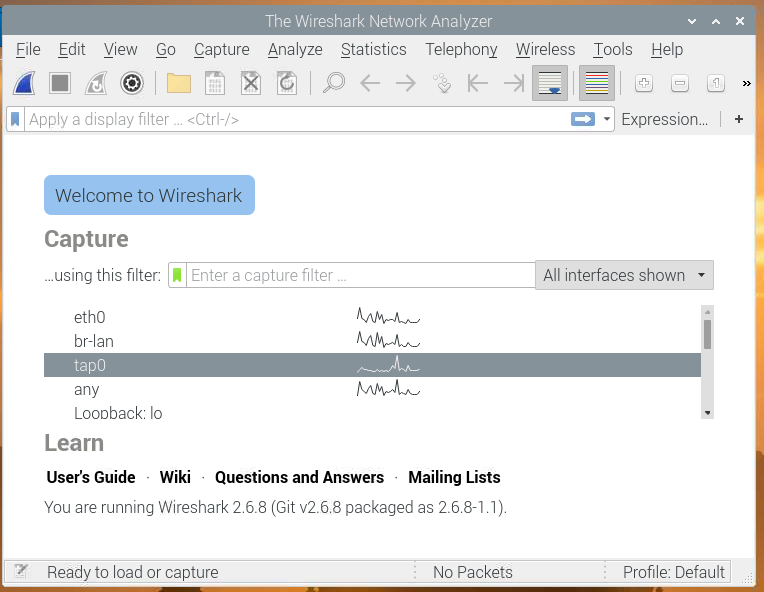 Wireshark allows for extensive filtering of data, to filter out irrelevant data in a long trace. The traffic can be filtered, based on the properties of the Z/IP frames:

The trace can easily be filtered down by entering:

In the “display filters” field in Wireshark. While it reduces the trace significantly, a lot of irrelevant traffic remains. It can be filtered by instead using:

However, this still shows all DTLS traffic which may be more than required.

If using IPv6, the LAN and PAN prefix are preset, and the filter can be based on those parameters. As both starts with fd00:: in the default configuration, the following filter can be applied:

However this may still show non-Z/IP traffic, as other host may also have addresses beginning with the prefix fd00::.

Instead, a narrower filter can be used:

Here, the filter specifically filters on Z/IP Gateways IP or the prefix of the Z-Wave PAN. This results in just the traffic coming from or going to the Z/IP Gateway and the Z-Wave nodes. Proceed with this filter.

Even with the narrow filter from above, more traffic than just the Z/IP traffic may still be seen, as Z/IP Gateway also handles mDNS, DHCP and many other protocols. It may be practical to narrow the filter even further. To do this filter the ports specifically use for Z/IP Traffic:

Merge this with our previous filter

This leaves an entirely blank trace. Now, the frames are certainly filtered out. To generate some Z/IP traffic, start libzwaveip:

The filter is working as intended.

The frames seen are only the initial DTLS handshake, and not carrying any Z/IP payload. To see a payload, send the following command with libzwaveip:

This triggers a lot more traffic, however there is a problem. If selecting one of he frames carrying “application data”, the actual payload cannot be seen, only the encrypted payload.

To decrypt the traffic in Wireshark, copy the DTLS PSK from zipgateway.cfg. In Wireshark, go to “Edit” -> “preferences...”. Expand “Protocols” and scroll to “DTLS”: 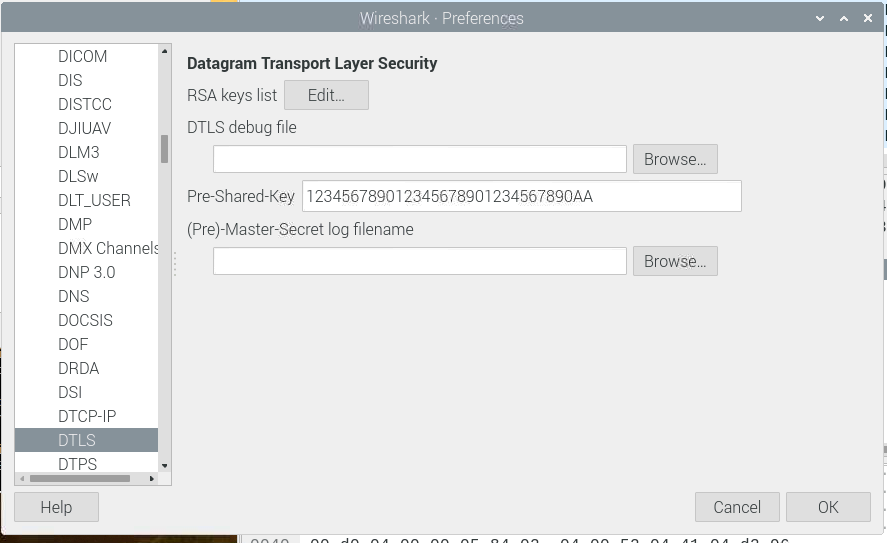 Here, the DTLS PSK should be entered in the “Pre-Shared-Key” field. Click “ok”. Wireshark will immediately reparse the trace to decode any DTLS frames. The data field is now also visible on the DTLS frames.

By expanding the data field, the payload can now be seen:

You can now see the actual payloads of all Z/IP frames, which allows you to apply even further filtering. There are two types of Z/IP frames, 0x02 and 0x03. The later are “keep alives”, which are used to prevent the DTLS session from timing out, but typically not interesting for debugging purposes. Try to append the following to the filter:

This filter checks that the first two bytes of the payload are 0x23 0x02, a Z/IP encapsulation frame. Now, you are only seeing the Z/IP traffic, nothing else. Many more filters can be devised based on the actual payload, such as filtering for specific command classes, or even specific values within a specific command class, allowing a huge trace with thousands or even millions of frames to be broken down very fast.

Wireshark itself does not understand Z/IP payloads and there tools are not available for parsing them yet. Instead, the frames have to parsed by hand: The first frame after clicking connect in PyZIP has the following payload:

From SDS13784-9 section 4.10.3 the format of the Z/IP packet is available: https://www.silabs.com/documents/public/miscellaneous/SDS13784-Z-Wave-Network-Protocol-Command-Class-Specification.pdf

The frames payload can be parsed byte for byte:

The payload is parsed easiest using the command class header, included in the Z/IP Gateway SDK. First, unzip the source:

Search for the first byte, identifying the command class, inside ZW_classcmd.h:

You will get the following response:

Here, the commands can be seen or the computer can find the command as follows:

Because this is a command, go with NODE_LIST_GET.

The COMMAND_CLASS_NETWORK_MANAGEMENT_PROXY NODE_LIST_GET is described in SDS13784-9 section 4.5.4.1, where it can be seen that the last byte is a sequence number.

To the above command, the Z/IP Gateway returns two responses:

Parse each of these frames.

Include a node to the Z-Wave network and try sending basic get to the device using libzwaveip:

In this case, the frame is sent to the node ID 6.

Next, look at the Wireshark trace: 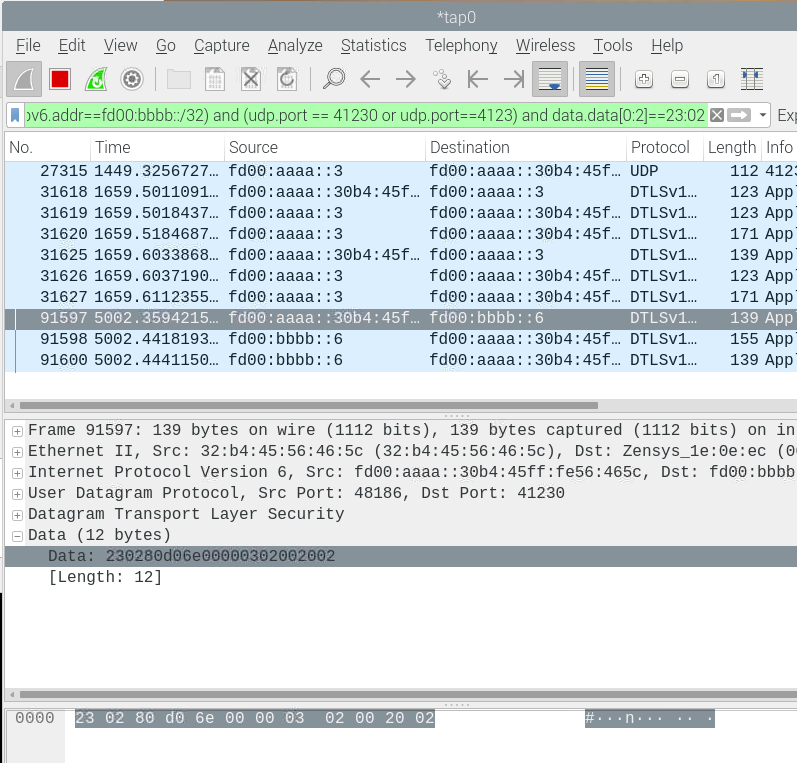 When looking at the very last byte of the IPv6 address of the node you are communicating with, it is identical to the node ID. This allows easy cross referencing of Zniffer traces and Wireshark traces and specific nodes can be filtered out in the Wireshark trace.

Try modifying the filter to only show traffic to and from the slave device.

At this point, Wireshark should be a familiar tool. You should know how to capture Z/IP traffic, decrypt the frames, and parse the contents.