For each networking client and server there are configuration variables, and commands and procedures to start and stop the client or server.

When a network connection is established, Gecko OS opens a network stream to write and read data. See Network Connections and Streams.

Other network features include ...

The Gecko OS DHCP client obtains an IP address from the WLAN DHCP server when the network is brought up with the wlan interface.

Configure the DHCP client with the variables:

Bring the network up by issuing any command that requires the network, or use the command:

The Gecko OS DHCP server supplies IP addresses to clients connecting to the soft AP when the network is brought up with the softap interface.

Configure the DHCP server with the variables:

The soft AP starts on reboot when configured to auto-start with the softap.auto_start variable.

You can bring up the soft AP with the network_up command. Either specify the softap interface, or set the network.default_interface variable to softap.

The soft AP starts automatically when you use Web Setup.

The DNS Client works with all the network protocols, including HTTP, TCP and UDP.

There are no configuration variables for the DNS Client.

The wlan.network.dns variable returns a list of addresses currently in use by the WLAN interface.

DNS Server features are available for the Soft AP interface.

Configuration options for the soft AP DNS server are:

The setup.web.url variable defines a list of URLs that clients can use to connect to the Web App.

The HTTP Client consists of a group of commands for HTTP methods:

For a secure TLS transaction, the url scheme specified with the command must be https. See HTTPS Client.

The http_get, http_post and http_head commands have an option to queue the request, prior to sending. While the request is queued, use the http_add_header to add custom headers as required, as shown in the example below. Use the stream_write command to add data to the body of a POST request.

Use the http_read_status command to read the HTTP response after a request is completed.

Connection timeout for the HTTP client commands is controlled by the tcp.client.connect_timeout variable.

The following (fictitious) HTTP POST example shows how to post data to an HTTP web server using the Gecko OS HTTP API. The HTTP body data posted in this example is a small piece of JSON (sent using stream_write 0 7). Since the -o option is used with the http_post command, a connection stream to the HTTP server is opened, but the HTTP POST is queued locally on the module.

Any response data received from the server may be read using stream_read.

The HTTP Client feature includes commands to handle file upload and download, between the Gecko OS device file system and an HTTP/S host:

The http_upload and http_download commands use HTTP POST requests in the background.

For a secure TLS transaction, the url scheme specified with the command must be https.

The Gecko OS HTTP webserver may be configured to run as a service on either the softAP or WLAN interface.

There is no network stream associated with the HTTP server. An HTTP client issues a request and the HTTP server sends a response. The client and server do not read or write data outside the request.

Gecko OS provides a simple RESTful API on top of the HTTP server. The API allows for a remote HTTP(S) client to issue any Gecko OS command. The result of the command is returned in a simple JSON format.

The RESTful API can be used in a number of ways:

The HTTP Server is configured with the following variables:

A client can use the RESTful API to issue Gecko OS commands and receive responses, and also for retrieval of module log messages.

The available requests are as follows:

The Web App provides a complete demonstration of the HTTP Server RESTful API, and can be customized as required. See Customizing the Web App.

The API supports either a simple GET request or a slightly more complex POST request.

With the REST API, the procedure for issuing commands is:

To issue another command, repeat steps 1-5.

Note: the log buffer has limited space. Older logs are replaced by newer ones. This should be called periodically to avoid losing logs.

The http.server.cors_origin variable allows you to specify origins for which the same-origin policy is relaxed.

This allows control of the module, via the HTTP server, from a remote site provided the module has originally been set up with a http.server.cors_origin domain that allows access from that site.

The HTTP client commands use TLS when the URL supplied has the scheme https.

The TLS CA certificate is supplied as a command argument or by default configured with the variables:

Configure NTP with the variables:

If NTP is enabled, time.last_set returns the seconds since the time was last set by NTP.

To read the time, get time.rtc and to determine the time zone, get time.zone.

Configure the TCP client with the variables:

Start the TCP client with the command:

To connect automatically to a remote host when the network is brought up, configure TCP client auto-connect with the variables:

The TCP client connection retry sequence is shown in the following diagram. Click to enlarge: 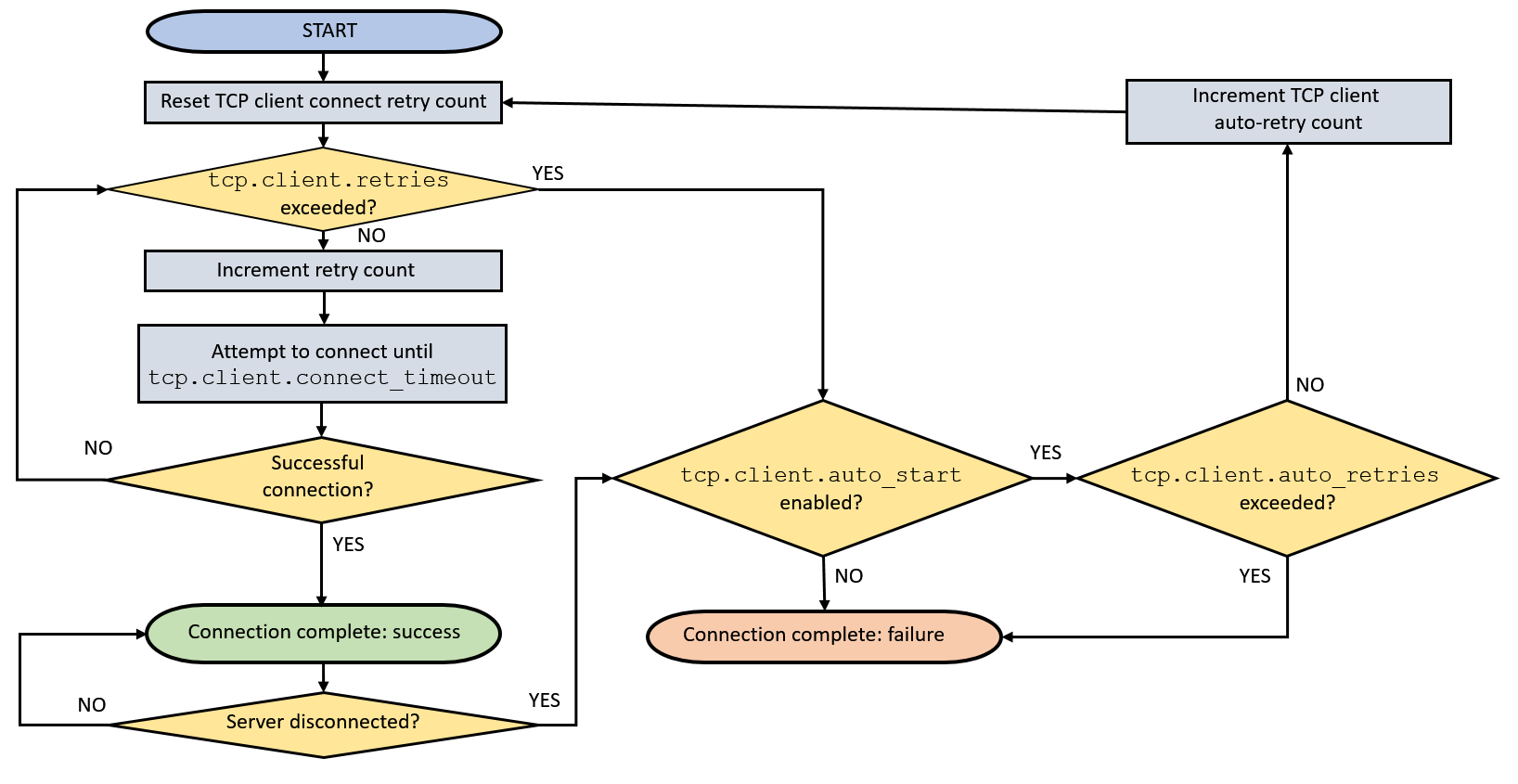 Configure the TCP server with the variables:

Acronyms Used in Above Table

To establish a TLS connection, other memory intensive features may need to be disabled. You can return the device to the default state with a factory reset.

TLS client handshake may require up to 85% of the available dynamic memory to complete. This memory requirement dictates the ability to run TLS client and other network streams simultaneously.

If TLS client auto-start is enabled, other streams with auto-start variable enabled will not start.

TLS details must be supplied as a command argument or configured with the variables:

To manually initiate a TLS connection with the TCP client, use the tls_client command.

To auto-start the TCP client with TLS, set:

The TCP client, with TLS enabled, has the features described in the TCP Client documentation.

Connect timeout for the TLS client command is controlled by the tcp.client.connect_timeout variable.

Configure the UDP client with the variables:

Start the UDP client with the command:

Configure the UDP client auto-connect with the variables:

Configure the UDP server with the variables:

Start and stop the UDP server with the command:

The udp_server has subcommands to read and write. These are equivalent to the stream read and write commands, with the added option of determining the client address and port.

Configure the UDP server auto-connect with the variables:

Streams are associated with:

When Gecko OS opens a network connection, file, or serial connection, it returns a stream handle. The stream commands act on a stream handle to perform actions such as read, write, poll and close. You can list open streams. Each stream has a specific type. See Stream Types.

When a stream is open, it is assigned a handle number. This handle is used to read/write/poll/close the stream.

Refer to the following stream commands to use the stream handle:

Use the stream_list command to view open streams. For example:

In serial STREAM mode, a single network connection (TCP/TLS/UDP client/server) streams to the serial bus. No stream read or write commands are required, as data flows automatically between the serial bus and the open stream. See Serial Interface, Stream Mode.

STREAM mode does not support the following stream types:

Note: When in STREAM mode, a TCP server is limited to one client connection.

The STREAM mode enabled stream appears in the stream list. Reading and writing data to the stream is not permitted.

Each stream type in the Stream Types table below uses a single stream, with the following exceptions and qualifications:

List the currently open streams with the stream_list command. Streams are listed with stream handle, type, and information about the stream source.

Note that some stream types support a limited set of operations. The following is a list of stream types, and for each type the command to create it, and the stream operations it supports.

The following variables allow setting up an automatic connection with a specified remote host.

Auto-start network streams are opened in the following order:

You can control a Gecko OS device with a TCP/IP telnet connection via a remote terminal, connected to the device via the Soft AP interface or the WLAN interface.

Configure the remote terminal with the variables:

A Gecko OS device broadcasts its properties in JSON format. The properties can be sent either as UDP packets to a UDP host or by a post request to an HTTP host.

Properties include by default the IP address and the MAC address.

Configure broadcast with the variables:

Captive portal is supported during websetup and optionally for the soft AP. When the HTTP Server receives certain requests, it redirects to the root HTTP server web page. See softap.captive_portal_enabled.