Silicon Labs WF(M)200 chips have the ability to encrypt the SPI or SDIO serial link between the Host and the Device.

The Secure Link capability is only available for trusted chips.

The encryption bitmap defines which messages should be exchanged as encrypted and which ones should remain clear.

The whole bitmap can be set globally using a dedicated command HI_SL_CONFIGURE_REQ_BODY and therefore defines the encryption type for all messages (requests, confirmations, indications).

Some messages are never encrypted. The corresponding bit in the bitmap is meaningless for the following messages:

Depending on the Secure Link mode of the device, the bit corresponding to HI_SL_CONFIGURE_REQ_BODY must OR must not be set in the bitmap:

To prevent a way to bypass the message encryption required by the Host, configure an On-field Device with Secure Link capability to enforced mode by sending the HI_SET_SL_MAC_KEY_REQ_BODY message to the Device just after Reset. This message carries the value of the Secure Link MAC Key, which will be burned in Device OTP memory once and for all. This key is used in the process of the Session Key Computation to authenticate peers during the key exchange and prevent Man-In-The-Middle attacks.

Secure Link MAC Key is a shared secret that must be stored in the Host non-volatile memory as well.

Once burned, the Device is definitely configured in enforced mode.

The following diagram presents the mandatory startup sequence, which must occur before any encrypted message can be sent or received.

After the Encryption Bitmap is set, the Secure Link is fully configured and Host and Device can exchange encrypted messages. 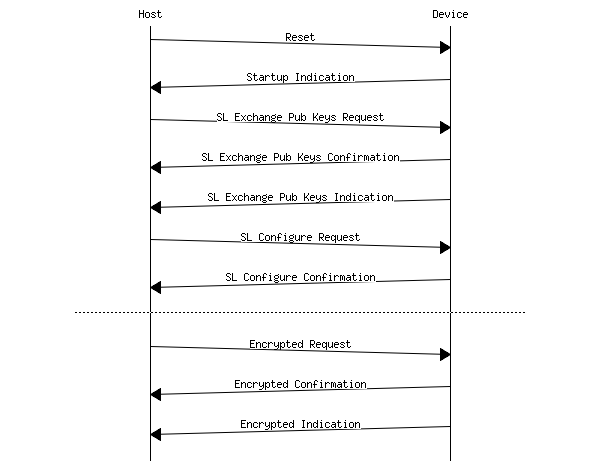 The following diagram presents the mandatory startup sequence for a chip in Evaluation mode. In this mode, Host is required to set-up a Secure Link MAC Key in the RAM of the Device by sending a Set SL MAC Key request. Once done, the key exchange procedure can continue as usual. On the contrary to Enforced mode, the HI_SL_CONFIGURE_REQ_BODY request must be sent in clear format. 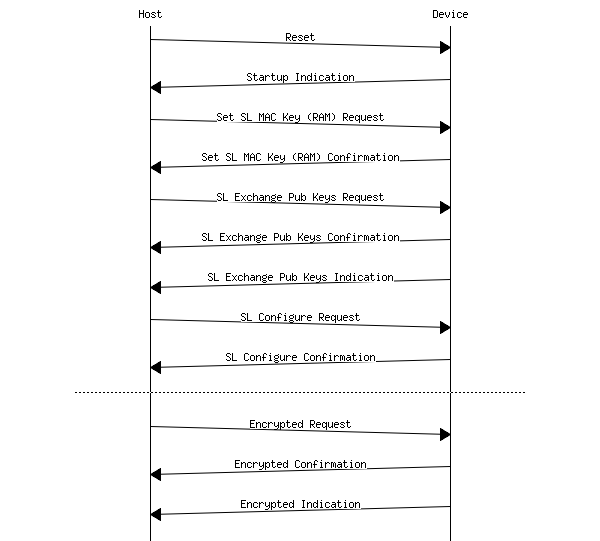 HI_SL_EXCHANGE_PUB_KEYS_REQ_BODY message has a special Algorithm flag that is used by the Host to specify which cryptographic algorithm should be ran to compute the session key:

The first algorithm provides strong security particularly by providing forward secrecy, but assumes that the Host processor embeds some cryptographic hardware capabilities, since curve25519 software implementations can take several seconds to compute on small MCUs. KDF on the other hand is very lightweight from a computational point of view and is particularly well suited for small MCUs without hardware support for elliptic curve. The counterpart is the loss of the forward secrecy property.

The next sections present Session Key computation for curve25519 and KDF algorithms, which includes 3 main steps

Prior to the mandatory key exchange, Host must generate a curve25519 key pair. The public key will be sent as part of the HI_SL_EXCHANGE_PUB_KEYS_REQ_BODY payload. The other requested parameter is the MAC of the key, which is computed using SHA512-based HMAC algorithm. The key used for HMAC is the SL MAC Key.

Warning: Device is expecting the Host Public Key to be sent in little-endian format.

For KDF algorithm, Session key generation relies on two 256-bit random numbers generated by each peer of the Secure Link. So Host needs to generate a pure random 256-bit number that will be sent to the Device by HI_SL_EXCHANGE_PUB_KEYS_REQ_BODY Host Public Key parameter.

The other requested parameter is the MAC of the key, which is computed using SHA512-based HMAC algorithm as for curve25519. See previous section for a code example.

When HI_SL_EXCHANGE_PUB_KEYS_IND_BODY gets back, Host must check the received Device Public Key (or Random number in case of KDF algorithm) by computing MAC on the received key and compare the result to the MAC received in the indication.

Warning: for curve25519, Device is sending its Public Key in little-endian format.

The following code is an example of Public Key checking. NcpPubKey and NcpPubKeyMac buffers are supposed to hold the values from the received indication.

After the Device Public key has been received and checked, it can be used to compute the Session Key. The following code is an example of Session Key computation based on the Device Public Key and Host Private Key. Note that a last pass of SHA256 is ran on the result of the curve25519 shared secret. The 16 lower bytes are extracted to form the final Session key.

Once Device random number has been extracted and checked from SL_EXCHANGE_PUB_KEYS_IND_BODY, the Session Key can be computed. KDF algorithm is based on HMAC-SHA256 with the following inputs:

Only the first 16 bytes of the HMAC result are extracted to get the final Session Key.

The following Python code is an example implementation.

When the Host has to send an encrypted request to the device, apply the following operations to the clear request message before sending:

Immediately after reset, the Nonce counter value should be initialized at 0 then be incremented after each request sending. In the context of Host sending request to Device, the Nonce counter type must be set to b01 to indicate that a TX counter is sent.

The following table shows the encoding of bits[31:30]:

The header is encoded as little-endian - bit 0 is the first bit of the lower address byte.

Encrypt both header and payload of the clear request using AES-CCM. Prior to running the encryption, the request must be padded with 0x00 so that the whole header+payload packet is 16-byte aligned. Note that an additional 16-byte CCM tag must be appended after the encrypted payload to allow message authentication by the Device.

AES-CCM requires a 12-byte length buffer to be passed as input. Depending on the kind of the encrypted message (request, confirmation, indication), the Nonce structure should be as follows:

When the Host has to receive an encrypted confirmation/indication from the device, apply the following operations to retrieve the clear message:

If the header[31:30] bits are equal to 'b01', the header[29:0] remaining bits encode the value of the RX counter. This value should be extracted and used to form the whole 12-byte AES Nonce as described in this table.

After AES Nonce is created, the message payload can be decrypted and checked using AES-CCM.

After decryption, some CCM padding bytes might be removed if message encryption length is not a multiple of 16.

The following code is an example of an AES-CCM decryption using mbed TLS library.

In the following code, msg is assumed pointing on the first encrypted byte (i.e., the second half of the request header) and msg_length is assumed to give the encryption length (which includes the CCM tag size)

Unless DisableSessionKeyProtection was set to 1 when configuring the Secure Link, the Device is checking Nonce limit violation on its side and will emit an error indication when detected.

The Host should use the following sequence to renegotiate the Session Key. 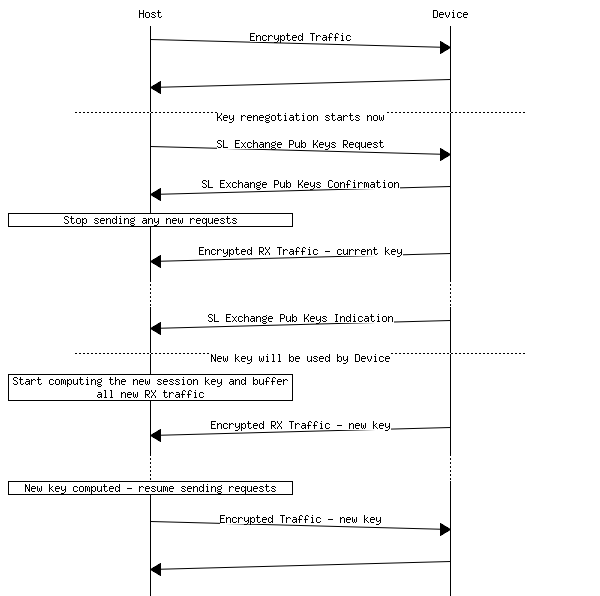 During the transition period when the key exchange request has been sent and indication has not arrived, some RX traffic may be sent by the Device which is encrypted with the current key. It means that Host should keep the current key value until the key exchange indication arrives. Also, Host should stop sending any new encrypted requests since Device is in the process of exchanging its key.

Contrary to the Startup sequence, sending an SL Configure request after exchanging the new keys is not mandatory since the original encryption bitmap has not been changed by the renegotiation process and remains valid.

Device Trusted or Not

Upon Firmware startup, the Device is sending a first startup indication message. The Startup Indication includes a capabilities.sl_mode sub-field whose value indicates if the device is trusted (i.e., the Secure Link feature is available) or not, and its mode (Evaluation or Enforced).

Evaluation mode is mostly dedicated to Development Kits devices. In Evaluation mode, the OTP memory does not contain the Secure Link MAC Key value. A temporary key can be loaded in the RAM memory of the Device (using HI_SET_SL_MAC_KEY_REQ_BODY with RAM as key destination) that will be used to generate a Session Key for the current Power Cycle. This way, the Host can encrypt/decrypt messages to/from the Device and evaluate the Secure Link capability. In this mode, the default value for the Encryption Bitmap just after Reset is 0x0000...0, meaning that no encryption is required by default.

Enforced mode is mostly dedicated to On-field production devices. In Enforced mode, the value of the Secure Link MAC Key has already been burned in OTP memory (using HI_SET_SL_MAC_KEY_REQ_BODY with OTP as key destination) and cannot be modified. The default value for the Encryption Bitmap just after Reset requires all messages to be encrypted except for these exceptions.