You are viewing documentation for version: 3.2 | Version History

Getting Started with Machine Learning on Silicon Labs Devices

Silicon Labs integrates TensorFlow as a component within our Gecko SDK and Project Configurator for our EFx32 series microcontrollers, making it simple to add machine learning capability to any application. This guide covers how to get started using TensorFlow Lite for Microcontrollers on Silicon Labs' EFx32 devices.

TensorFlow is a widely used deep learning framework, with capability for developing and executing neural networks across a variety of platforms. TensorFlow Lite provides an optimized set of tools specifically catered towards machine learning for mobile and embedded devices.

TensorFlow Lite for Microcontrollers (TFLM) specifically provides a C++ library for running machine learning models in embedded environments with tight memory constraints. Silicon Labs provides tools and support for loading and running pre-trained models that are compatible with this library.

The Gecko SDK includes TensorFlow as a third-party submodule, allowing for easy integration and testing with Silicon Labs' projects. Note that the included TensorFlow version may differ from the latest release of TensorFlow.

Additionally, TensorFlow Software Components in the Project Configurator simplify the process of including the necessary dependencies to use TFLM in a project. 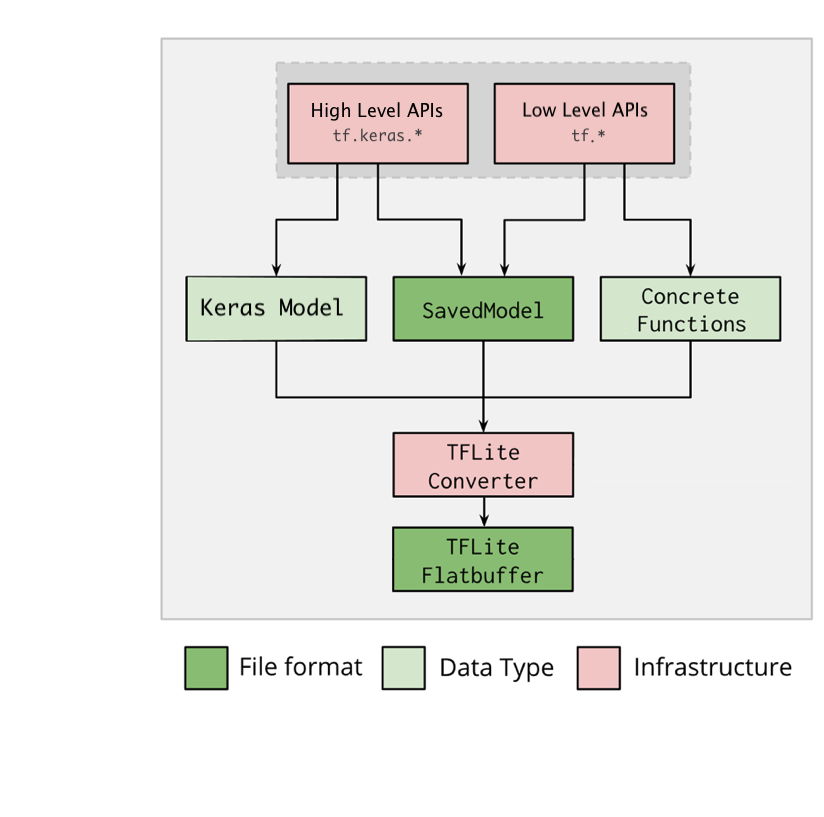 When developing and training neural networks for use in embedded systems, it is important to note the limitations on TFLM that apply to model architecture and training. Embedded platforms also have significant performance constraints that must be considered when designing and evaluating a model. The embedded TLFM documentation links describe these limitations and considerations in detail.

Both TensorFlow and Keras provide guides on model development and training:

Once a model has been created and trained in TensorFlow or Keras, it needs to be converted and serialized into a *.tflite file. During model conversion, it is important to optimize the memory usage of the model by quantizing it. It is highly recommended to use integer quantization on Silicon Labs devices.

A complete example demonstrating the training, conversion, and quantization of a simple TFLM compatible neural network is available from TensorFlow:

Once a trained and quantized TFLite model is obtained, the next step is to set up the TFLM libraries to run inference on the EFx32 device.

In addition to these required TFLM components, software components for obtaining and pre-processing sensor data can be added to the project. As an example for audio applications, TensorFlow provides a microphone frontend component that includes powerful DSP features to filter and extract features from raw audio data. Silicon Labs developed drivers for microphones, accelerometers, and other sensors provide an simple interface for obtaining sensor data to feed to a network.

To instantiate and use the TensorFlow APIs, follow the steps below to add TFLM functionality to the application layer of a project. This guide closely follows the TFLM Getting Started Guide, and is adapted for use with Silicon Labs\' projects.

A special note needs to be taken regarding the operations used by TensorFlow. Operations are specific types of computations executed by a layer in the neural network. All operations may be included in a project at once, but doing this may increase the binary size dramatically (>100kB). The more efficient option is to only include the operations necessary to run a specific model. Both options OBare described in the steps below.

1. Include the library headers

If using a custom, limited set of operations (recommended):

If using all operations:

2. Include the model header

The autogen/ folder is always included in the project include paths, and so an imported model may be generically included in any project source file with:

TensorFlow requires a memory arena for runtime storage of input, output, and intermediate arrays. This arena should be statically allocated, and the size of the arena depends on the model used. It is recommended to start with a large arena size during prototyping.

Note: After prototyping, it is recommended to manually tune the memory arena size to the model used. Once the model is finalized, start with a large arena size and incrementally decrease it until interpreter allocation (described below) fails.

This should be performed even if the TensorFlow Lite Micro Debug Log - None component is used. It is recommended to instantiate this statically and call the logger init functions during the app_init() sequence in app.c

Continuing during the app_init() sequence, the next step is to load the model into tflite:

If using all operations, this is very straightforward. During app_init(), statically instantiate the resolver via:

Note: loading all operations will result in large increases to the binary size. It is recommended to use a custom set of operations.

If using a custom set of operations. A mutable ops resolver must be configured and initialized. This will vary based on the model and application, and to determine the operations utilized in a given .tflite file, third party tools such as netron may be used to visualize the network and inspect which operations are in use.

The example below loads the minimal operators required for the TensorFlow hello_world example model. As shown in the Netron visualization, this only requires fully connected layers:

The final step during app_init() is to instatiate an interpreter and allocate buffers within the memory arena for the interpreter to use:

The allocation will fail if the arena is too small to fit all the operations and buffers required by the model. Adjust the tensor_arena_size accordingly to resolve the issue.

For default behavior in bare-metal application, it is recommended to run the model during app_process_action() in app.c in order for periodic inferences to occur during the standard event loop. Running the model involves three stages:

It is important to match the shape of the incoming sensor data to the shape expected by the model. This can optionally be queried by checking properties defined in the input struct. An example of this for the hello_world example is shown below:

At this point, application dependent behavior based on the output prediction should be performed. The application will run inference on each iteration of app_process_action().

After following the steps above and choosing to use the mutable ops resolver, the resulting app.cpp now appears as:

Note that the micro_speech example demonstrates use of the MicroMutableOpResolver to only load required operations.